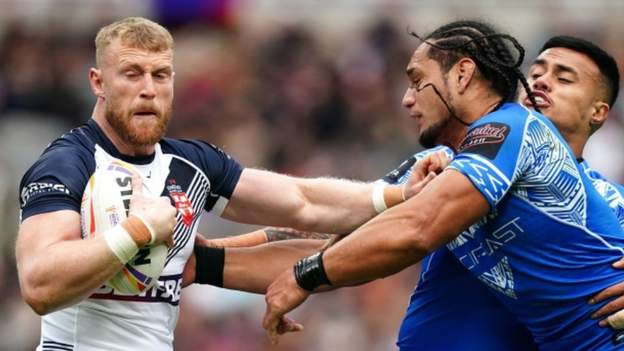 Manager Shaun Wane has made a change to England’s 19-man squad for Saturday’s World Cup semi-final against Samoa.

England, which beat Samoa 60-6 in the first World Cup match, they thrashed Papua New Guinea 46-6 to set up a quarter-final clash at London’s Emirates Stadium.

Thompson scored one of England’s seven tries when beat France 42-18 in Bolton.

If prop Chris Hill plays on Saturday, he will move into second place on the all-time list of World Cup appearances with 16.

Hill, who turned 35 last week, broke the British record of 14 held by John Atkinson, Roger Millward and George Nicholls in the quarter-final against PNG to tie with former Australian international Bob Fulton on 15.

Former hooker Cameron Smith holds the record with 17 appearances at the 2008, 2013 and 2017 World Cups, captaining Australia to victory in the last two tournaments.

Hill is the third most capped English player of all time with 33, behind only Ryan Hall (40) and James Graham (44).