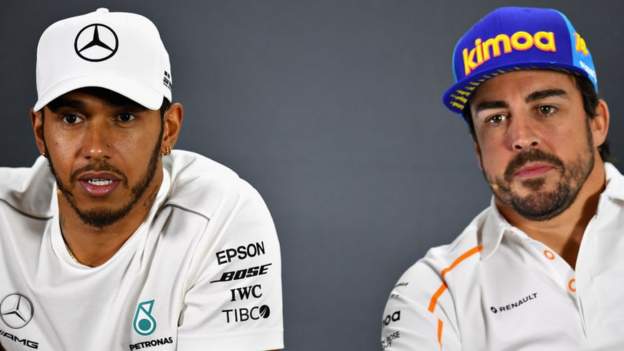 Lewis Hamilton has reacted to his old rival Fernando Alonso by questioning the value of some of his championships.

The Spaniard said in an interview with the Netherlands’ Telegraaf this week that a championship has “less value when you’ve only had to fight with your teammate.”

Hamilton then posted a photo on social media from 2007, when he and Alonso were teammates at McLaren, with him on top of a podium and Alonso second.

The seven-time champion posted a thumbs-up symbol with the photograph.

Hamilton said after Sunday’s Mexico City Grand Prix: “I don’t have much to say about it. It makes me laugh a little bit.”

“I’ve tried to be very respectful over the years and when I’ve ever been asked who was the best driver (that I’ve ever raced against), I’ve always tried to praise him.”

“But it’s definitely interesting to see the comments being made, but it doesn’t really matter.”

Prior to those comments, Alonso had tried to lessen the impact of his comments with a Twitter post on Saturday.

He wrote: “Please all the titles are amazing, well deserved and inspiring. Incomparable with each other and let’s enjoy champions and legends of our current time.”

“Tired of the continual search for headlines. Let’s enjoy them.”

Hamilton made his F1 debut in 2007 and he and Alonso engaged in a close and sometimes bitter fight. Both ended up losing to Ferrari’s Kimi Raikkonen by a single point.

At the end of the season, Hamilton and Alonso were level on points and both had four wins, but Hamilton declared himself at the top of the championship by virtue of having more second places.

Hamilton’s Twitter post was a response to social media’s reaction to Alonso’s interview, in which he compared his two world titles in 2005 and 2006 to Max Verstappen’s this year and last, against a record seven. from Hamilton.

Alonso said: “This year Max is very dominant and at some point he was able to sail to the world title. Last season was different. I thought he beat Lewis at the end and I think he is a worthy champion.”

“I also have a lot of respect for Lewis. Still, it’s different when you win seven world titles, when you’ve only had to fight with your teammate.

So I think a championship has less value than if you have fewer titles but have had to compete against other drivers with the same or even better material.

“I never had to fight my teammate Giancarlo Fisichella to win the title. I also never saw Max fight Sergio Perez or Alex Albon to win races.”

“But [Michael] Schumacher mainly battled with his teammate Rubens Barrichello to become champion five times in a row and Hamilton with Nico Rosberg and Valtteri Bottas. That’s different, I think.”

Alonso’s comments are a questionable interpretation of some of the titles won by Schumacher and Hamilton.

Schumacher and Ferrari dominated in 2001, 2002 and 2004 and the German driver only had to beat his teammate, but in 2003 he had a close fight with McLaren’s Raikkonen and Williams’ Juan Pablo Montoya.

Ferrari’s Sebastian Vettel led the championship for much of those two years, only to have his title campaign undermined by both driver and team errors, as well as problems with reliability and the loss of the development war to End of the year.

Hamilton’s Mercedes team boss Toto Wolff said after the Mexico City Grand Prix: “[Alonso]is a teaser Comedy, it makes headlines. Sport is about starters, they are great champions. Alonso likes to throw one. I don’t think he bothers Lewis one millimeter.”