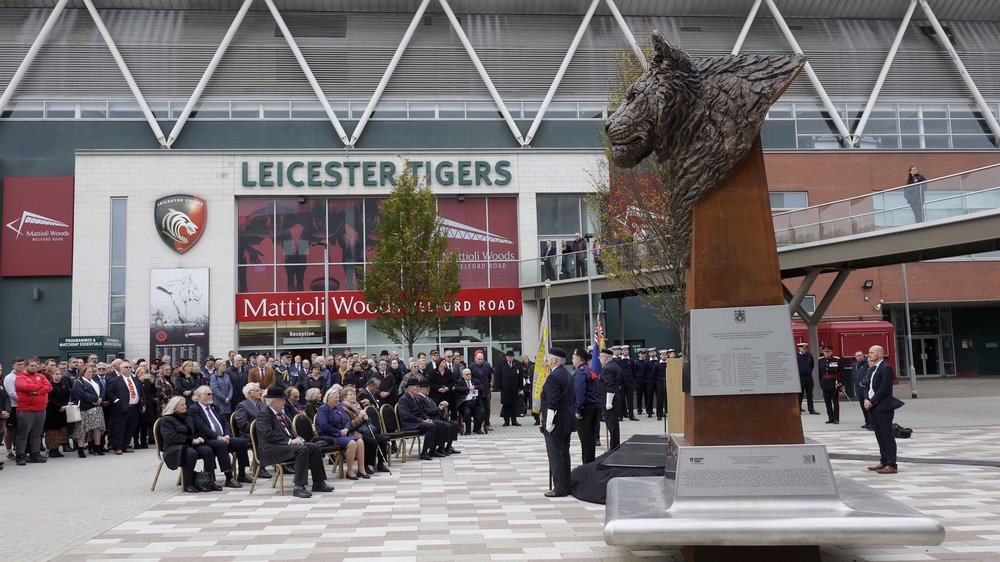 A memorial celebrating the lives of the 54 Leicester Tigers players who lost their lives in the conflict and recognizing long-standing links with the armed forces has been unveiled at the club’s iconic home.

The Leicester Tigers Foundation Monument, installed in the square between the Tigers’ Mattioli Woods Welford Road stadium and the new Brooklyn Hotel, features a bronze tiger’s head on a four-meter column bearing the names of the previous players.

It also acknowledges the close links between the Leicestershire Regiment and Tigers since the club’s formation in 1880, displaying the names of its players who served and survived.

The 54 names in The Fallen include Alexander Obolensky, the Russian prince who played for Tigers and England in the 1930s but lost his life in RAF service; the English international Frank Tarr, who fell at Ypres in 1915; Victor Beamish of the famous Irish rugby family; and the first casualties of the Tigers date back to the conflict abroad at the end of the 19th century.

The names of Tigers who survived the world conflict also feature on the Monument, including Guy German, who played 66 times for the club in the 1920s and later was a senior British officer among the Colditz prisoners as a lieutenant colonel of the Leicestershire Regiment.

Peter Wheeler, former captain and manager of the Leicester Tigers, and former president of the Rugby Football Union, officially opened the Monument with guests from rugby, the military and the local community.

Rory Underwood MBE, who served as an RAF pilot during his rugby playing career with Leicester and remains England’s record scorer, was joined by current players Ollie Chessum and Harry Simmons, plus David Needham of the rugby team in a wheelchair from the Tigers and Vicky Macqueen from the club. women’s rugby program and former players Paul Dodge, Ian Smith and Martin Whitcombe.

Children from the town’s Fossebrook Primary School represented the local community at the opening.

Supporters who helped fund the Monument with donations for memorial wreaths and added their names to its base were also invited to share in the occasion.

The Monument is the work of designer Harvey Spencer Gardiner and artist Steve Winterburn, using history and heritage to connect with communities and inspire positivity in the future.

This iconic facility directly faces Ypres Cloth Hall, an area where several Tigers players lost their lives, and houses a QR code to tell more of the story while providing a focal point to inspire engagement with the sport through work. of the Leicester Tigers Foundation in the community and initiatives with the Royal British Legion, Combined Services and War Graves Commission.