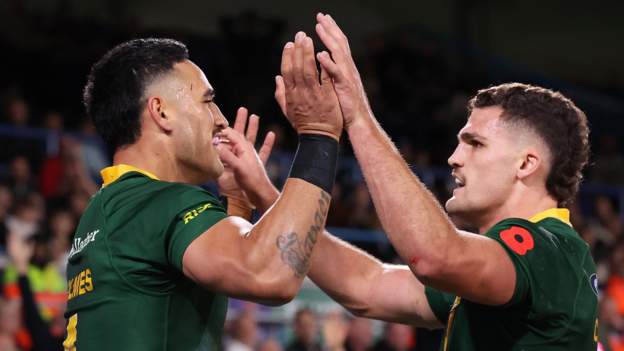 Mal Meninga’s men passed a tough test and will face the winner of England against Samoa in the final at Old Trafford next Saturday (start 16:00 GMT).

In a close and tense duel, New Zealand took the lead through Jahrome Hughes and, although speedy Josh Addo-Carr and Valentine Holmes answered for Australia, Dylan Brown’s attempt gave the Kiwis a 14-10 lead in the game. break.

Peta Hiku’s effort was ruled out for offside early in the second half and New Zealand had to pay when Cameron Murray blasted through from close range, ultimately proving crucial.

Australia controlled much of the second period but looked as though they might have lost the contest with seven minutes to go when Hiku landed in the corner but was ruled in contact as the champions pushed their way through.

Champions Australia have totally dominated the international game and now look to extend their record by lifting the trophy for the 12th time.

In a repeat of the 2013 final, when Australia comfortably won 34-2 at Old Trafford, this was a much closer contest, but it was Green and Gold that showed their mettle with a controlled and disciplined kicking game to advance.

The semi-final saw both sides go toe-to-toe in an intense display of speed and skill that brought a raucous Elland Road crowd to their feet, cheering every brutal blow exchanged.

The Kiwis set the tone with an intense haka and took a surprising early lead when scrum-half Hughes moved in after Joseph Manu’s brilliant touch following Brown’s high kick.

But Addo-Carr showed why he is the fastest player in the NRL, a competition in which he clocked a speed of 24 miles per hour last season, by scoring an exceptional first down for Australia.

The winger, nicknamed The Foxx, showed a remarkable change of pace from 35 meters to latch onto Ben Hunt’s booming kick and land in the corner.

It was Addo-Carr’s 12th try of the tournament, bringing him closer to teammate Holmes’ record from the 2017 tournament, with Holmes grabbing the next try by going over Jack Wighton’s last pass.

The Kiwis were under pressure but responded through Brown after Ronaldo Mulitalo set him up and cleared for a 14-10 lead.

A dramatic start to the second half saw Hiku land on an Addo-Carr fumble, but the video referee painfully dismissed the attempt as the center had drifted slightly offside.

The Aussies capitalized when Murray fended off a challenge from three defenders to stretch between the posts, which Nathan Cleary converted crucially for a two-point lead.

With time running out, Jordan Rapana broke through the opponents’ baseline with a brilliant run and Hiku thought he had secured victory for New Zealand by playing acrobatically, but they were heartbroken when the video referee ruled against him once again.

New Zealand collapsed onto the pitch at the final whistle, with several players crying, being comforted by their joyous opponents who will contest the masterpiece once more.