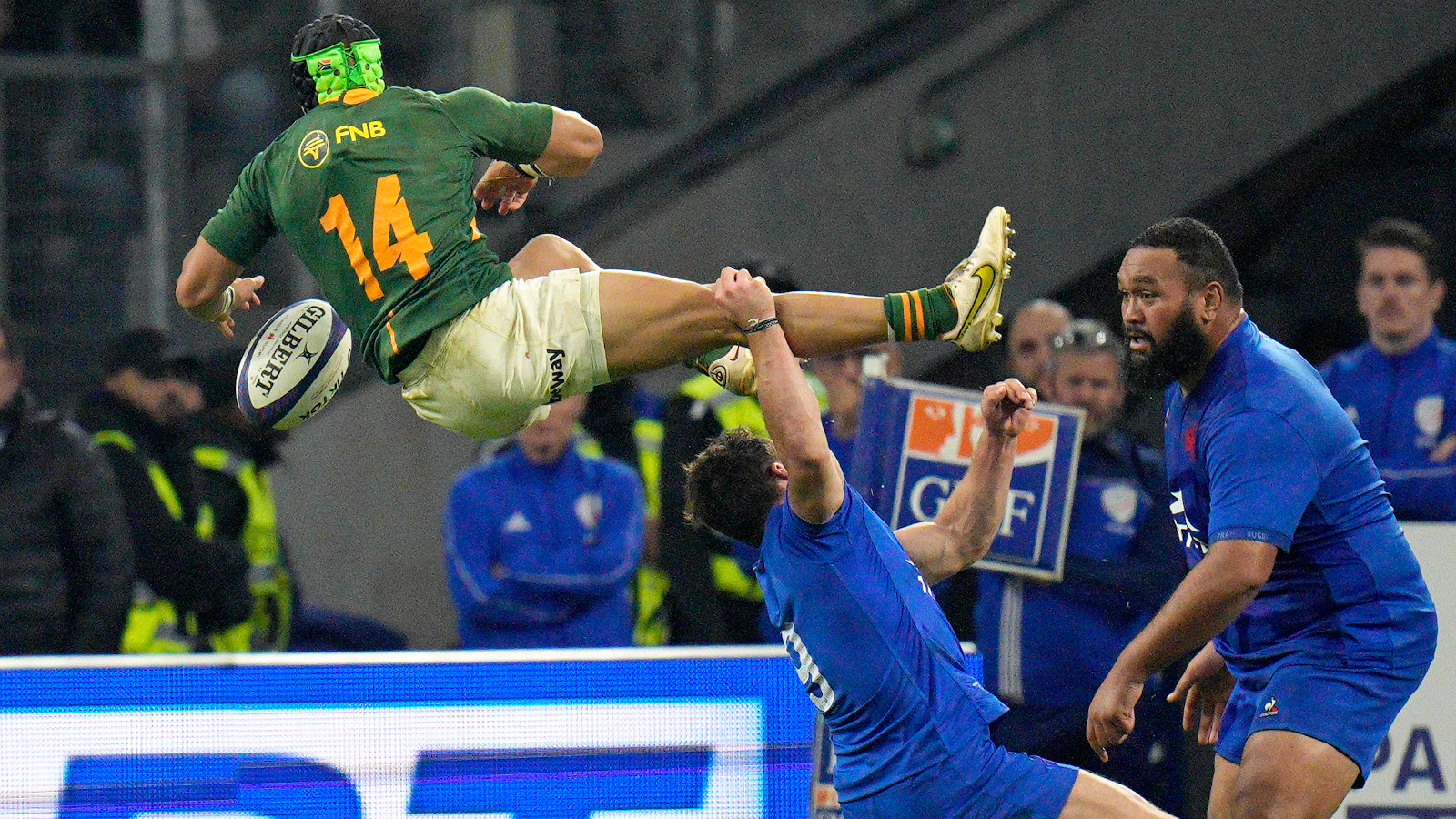 Du Toit was deservedly ejected in the first half for connecting with the head of Jonathan Danty, who was ejected and later revealed to have suffered a broken eye socket.

Les Bleus immediately benefited from the wing’s absence, taking a 13-0 lead thanks to a try from Cyril Baille and a pair of penalties from Thomas Ramos, but the visitors held off impressively.

Siya Kolisi scored and Cheslin Kolbe added a conversion and a penalty to cut down the delays before Ramos gave the hosts a 16-10 half-time lead.

Then came the next big talking point in the contest. South Africa were on the attack when Faf de Klerk jumped to the wing, where Kolbe was lying in wait. Dupont had his eyes on the ball, but he stuck out his wing as the Springbok leapt into the air, causing the sprinter to land on his head.

Referee Wayne Barnes, for the second time in the match, had no choice but to red card the player.

With both teams at 14, the Boks took control when Kurt-Lee Arendse scored and De Klerk kicked a conversion and a penalty.

And after Ramos and Damian Willemse had exchanged three-pointers, the reigning world champions were going ahead in the closing stages, but a try from Sipili Falatea and a penalty from the French full-back snatched victory in one of the big test matches.

In one of the most anticipated encounters during the Autumn Nations Series, they did not disappoint. The physical aspect was off the charts as both sides went toe-to-toe, but unfortunately for Boks Du Toit he did it literally.

France was already 3-0 in front through Ramos when the winger went to clear a ruck. However, he did not attempt to wrap and instead headed with his head, causing him to be ejected.

Collision victim Danty was duly retired, but he wasn’t the only player forced to retire in such a brutal encounter.

Fabien Galthie’s men saw four players substituted in total due to injury, with Thibaud Flament and the two mainstays, Baille and Uini Atonio, also substituted, although the latter returned for the second half.

He disrupted what, at the time, had been a fine French display, with Ramos adding a second three-pointer and Baille shooting from close range for his first attempt, but credit must go to the Boks who showed great spirit and quality in responding .

Jacques Nienaber’s charges had shown a bit more ambition compared to recent matches, with Arendse and Kolbe heavily involved, but it was his trusty deck that did most of the damage.

They overpowered France’s much-disturbed pack of forwards and that led to a Kolbe three-pointer before Kolisi landed from another lineout minutes later.

Ramos’ third penalty opened a six-point margin at interval before kickers traded efforts off the tee early in the second half.

However, South Africa, despite being down to 14 men, were beginning to take the lead and were soon favored by their opponents’ lack of discipline.

The star of France sees red

Almost immediately after star playmaker Dupont was shown the red card, the Springboks took the lead for the first time when Arendse crossed the white line to convert a try.

De Klerk then extended his lead with a penalty before Ramos made it a one-point game with a quarter of the game remaining.

However, the Boks continued to be clinical, and their third kicker of the night, Willemse, made it 26-22 with 15 minutes to go.

Nienaber’s men had done a great job of keeping France from getting into their rhythm, but in the closing stages Les Bleus increased the pressure.

South Africa cynically fouled out, resulting in a yellow card for Deon Fourie, before Falatea crossed the white line to put France ahead again.

Ramos missed the conversion but added a three-pointer shortly after to secure the win in an outright thriller.