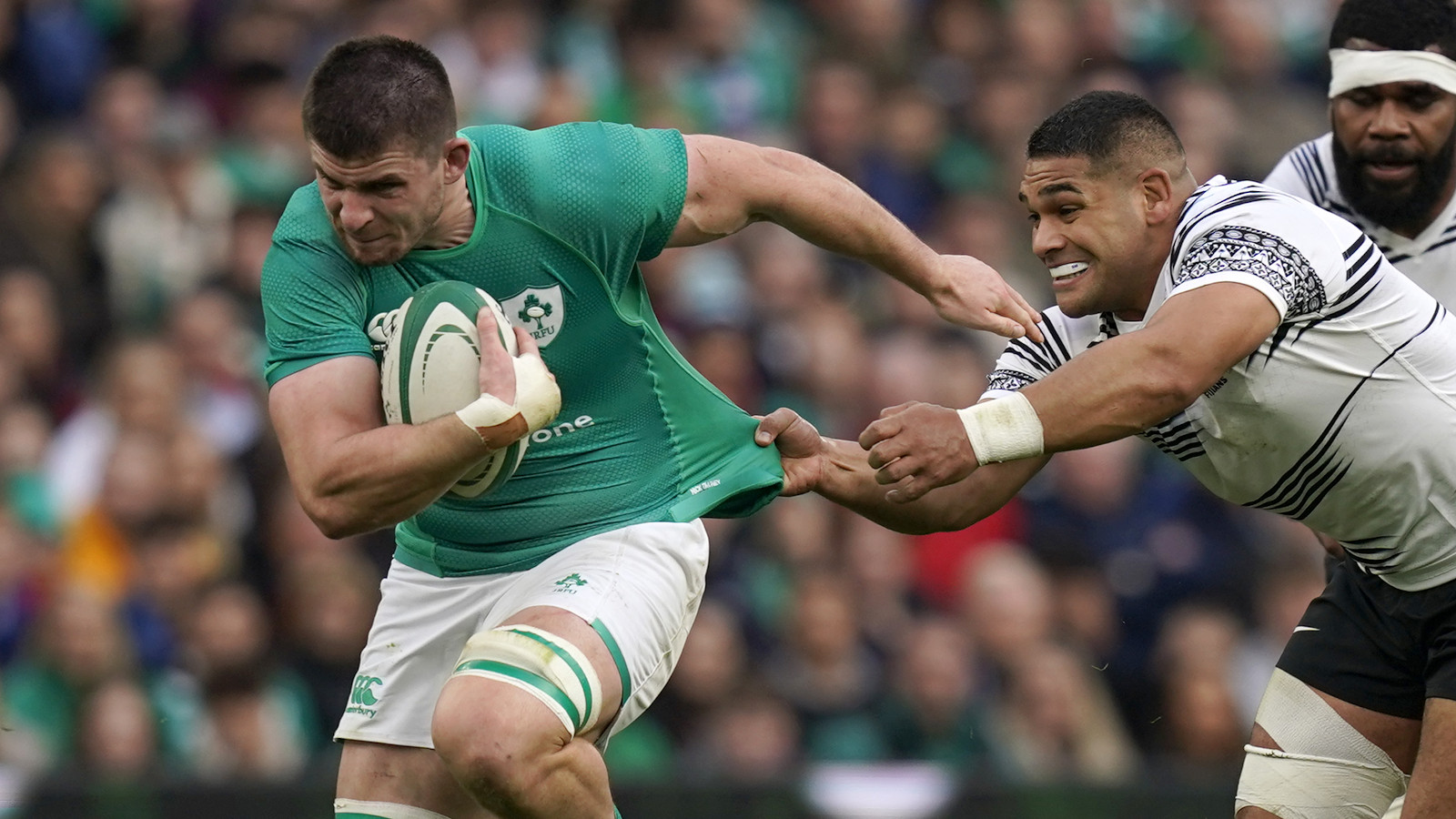 A much changed Ireland got the job done against Fiji in their second game of the Autumn Nations Series as they won 35-17 in Dublin on Saturday.

Two tries by Nick Timoney were joined by a touchdown apiece from Robert Baloucoune, Mack Hansen and Cian Healy and the Irish prevailed once again.

In response there were Fiji tries from Kalaveti Ravouvou and Simione Kuruvoli, but a red card for Albert Tuisue dashed their hopes of a shock victory.

Fiji played most of the second half a man down after Gloucester flanker Tuisue was sent off for hitting Joey Carbery in the head, while Manasa Saulo and Api Ratuniyarawa spent spells on the sin bin.

Despite a fragmented display with opportunities for a handful of fringe players, the stuttering Irish were never in serious danger of falling to a first loss to the Pacific Islanders as they prepared for next weekend’s clash with Australia in victorious fashion. .

However, in addition to Carbery’s premature departure, an early injury to Robbie Henshaw was an additional concern for the home team following their 16th victory in 18 Tests.

Head coach Farrell made nine changes to the starting XV that ousted South Africa amid a minor injury crisis, with Tadhg Furlong becoming the 109th man to captain Ireland.

The subdued atmosphere continued throughout the game and the spectators who contributed noise were quickly stunned into silence by Fiji’s quick start.

Teti Tela went astray with an early penalty but, after regaining possession, the Fijians ran freely through the Irish defence, culminating in Ravouvou’s cross running clear to dive after a deft interplay between captain Waisea Nayacalevu, Seta Tuicuvu and Vinaya Habosi.

There was a wave of appreciative applause from the home fans and Ireland’s sloppy start was compounded by Henshaw limping after Tela’s successful conversion.

With the Irish beating the Springboks and set to face the Wallabies, rival manager Vern Cotter said the hosts may have other matters on their minds and would use this match as a “training session”.

Farrell’s men eventually began to dispel that theory when the Timoney wing sank twice in quick succession, each Kieran Treadwell side seeing a score discarded at review due to ground failure.

Fiji, who had sent off prop Saulo after a backlog of infringements, briefly reduced the delays through a Teti penalty, before Jimmy O’Brien’s superb line break followed by a fine pass from Jamison Gibson-Park gave Baloucoune a simple shot from the right.

Carbery, given another chance to replace influential captain Johnny Sexton, nailed the difficult conversion to maintain his impeccable record and reinforce the home team’s control of the scoreboard before half-time.

The Munster man’s ill-fated chance to impress was cut short when he left the field in the 46th minute following Tuisue’s crude shoulder challenge, resulting in the Test debut of provincial team-mate Jack Crowley.

Cards hurt Fiji during the game

Fiji were briefly down to 13 players when London Irish lock Ratuniyarawa received a yellow card.

Ireland finally capitalized on their numerical advantage when Hansen crossed for a deserved try, with the 22-year-old Crowley adding the first of his two conversions.

Classic Fiji rugby, with slippery hands and good volleys, sent replacement Kuruvoli over 16 minutes from time to give the weary visitors a dim hope of an unlikely comeback.

But veteran prop Healy made sure Ireland had the last word, sweeping to cap off an 11th successive home win, a record Farrell’s men hope to improve when they complete their November fixtures against Australia in seven days.