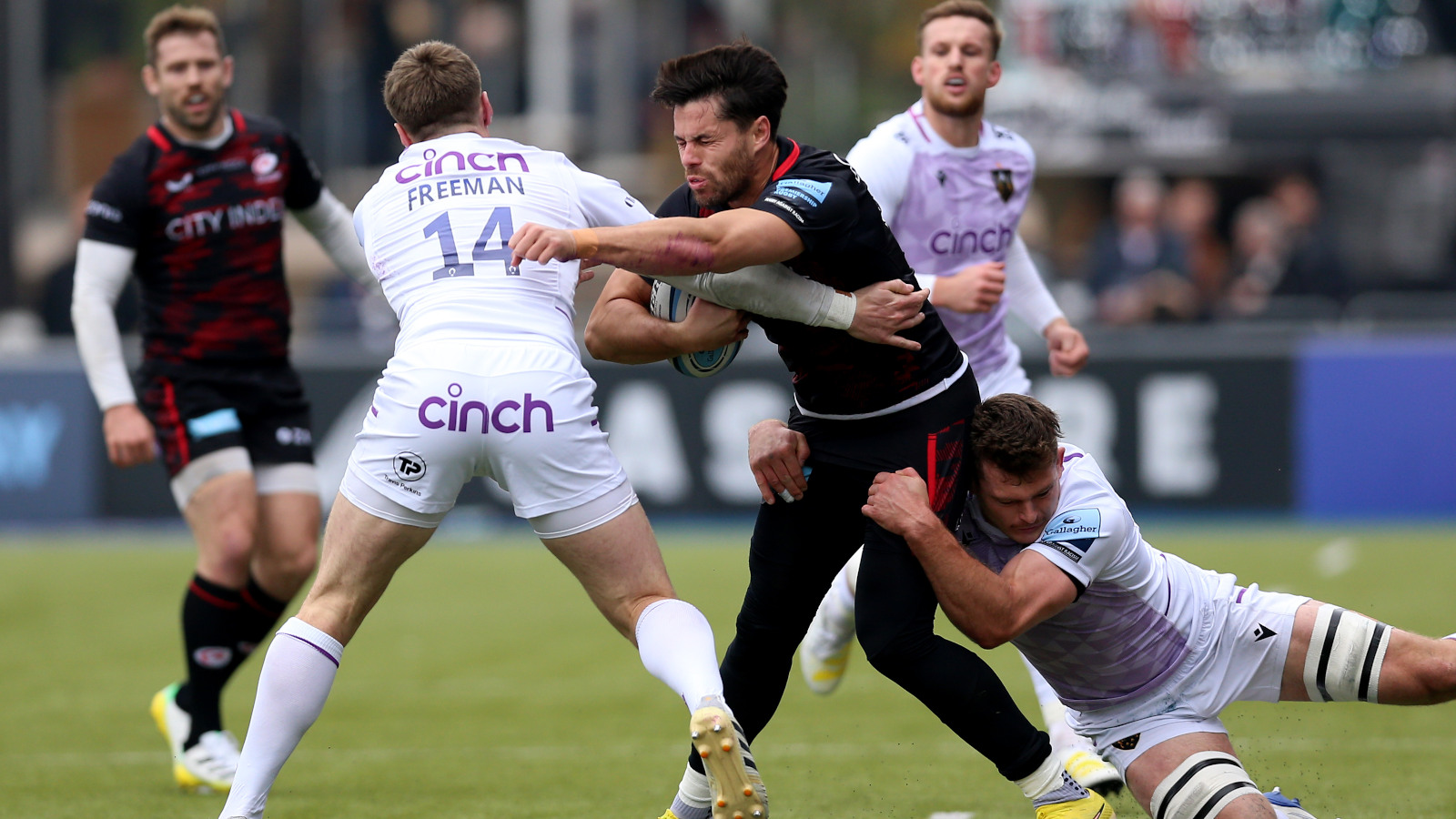 Saracens launched an incredible comeback to beat Northampton Saints 45-39 in the Premiership clash at StoneX Stadium on Sunday.

This was Saracens’ ninth successive league win at the start of the season, but it seemed almost impossible with Northampton sailing at one point in the game.

But the Premiership leaders dug deep and, inspired by Ben Earl, surged to victory in a result that takes them 15 points clear at the top.

A third-minute penalty from Goode gave Saracens an early lead, but it was Saints who scored the first try of the game as Haywood hit a driving lineout.

The hosts then suffered two blows in quick succession. Spindle prop Robin Hislop set off to miss a HIA before a well-timed pass from Rory Hutchinson created the space for co-centre Dingwall to crash for Northampton’s second.

Smith converted both attempts to give the Saints a deserved 14-3 lead at the end of a spirited first quarter.

The Saracens were lethargic in that early period, but they came alive with an excellent attempt. Halfway through they moved the ball wide for Daly to run before giving Maitland an easy encounter.

Goode converted from the touchline before his team suffered another injury when full-back Max Malins left the field with a leg injury.

Goode went off target with a 40-yard penalty attempt before the TMO ruled out an attempt by the irrepressible Saracens captain Earl for crossing earlier in the play.

Compounding the home team’s measly five minutes, Goode was penalized severely for a late tackle with Smith knocking down the resulting kick before the outside half made a clean break to send Dingwall on the run for his second.

Smith converted and added a penalty with Saracens’ problems continuing as they lost replacement prop James Flynn to another HIA miss, resulting in passive scrums.

The home team badly needed an answer to stem the tide and they got it when Andy Christie pulled away to give Maitland his second to leave the hosts trailing 27-17 at half-time.

Two minutes later, Saracens prop Marco Riccioni became their fourth injury victim, being aided by a leg problem to be replaced by Ethan Lewis to leave them with two hookers on the front row.

The game was looking for the unlucky Saracens as Dingwall completed his hat-trick to reward a fine round of passing with Smith missing the conversion to end a run of 17 successes since joining the Saints.

An Angus Scott-Young flurry set up a try for Skosan, but the Saints lost Lukhan Salakaia-Loto in the sin-bin for a high tackle.

That was the boost the Saracens needed and they gave themselves a glimmer of hope when replacements Simpson and Hallett scored converted tries in quick succession.

Salakaia-Loto returned from the bin to temporarily stem the tide, but Saints scrum-half Tom James, seconds after entering the field, was yellow carded for a high tackle to set up a tense final eight minutes.

Earl ran for a man-of-the-match attempt before Daly completed the remarkable comeback with the winner two minutes from time.