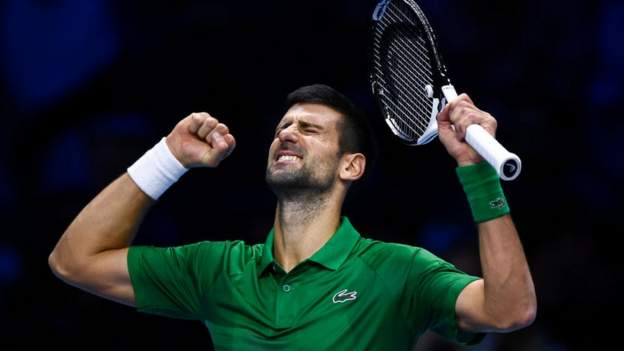 Novak Djokovic reached the semifinals of the ATP Finals in clinical fashion against a frustrated Andrey Rublev.

The former Serbian world number one did not face a single break point in a 6-4 6-1 win over the Russian in Turin.

Djokovic left Rublev smashing his racket on the ground at times with 69 minutes of merciless tennis.

The victory came hours after his Australian Visa ban lifted to pave the way for the 21-time Grand Slam champion to play at the Australian Open in January.

Djokovic made the breakthrough against Rublev in the tenth game to take the first set before embarking on what he described as a “flawless” second set.

“One of the best games of the year without a doubt against an always tough opponent. It was an incredible performance.”

He added that having his two sons and his wife watch one of his games together for the first time in the stands had given him additional motivation to get the job done quickly.

Later on Wednesday, Stefanos Tsitsipas takes on Daniil Medvedev in the other Red Group match, with both seeking their first wins. Djokovic will face Medvedev in their final group match on Friday.

The season-ending ATP Finals feature the top eight men’s players of the season and Djokovic is looking to win the event for a record-tying sixth time.

But 22-time Grand Slam winner Rafael Nadal’s hopes of a first title ended on Tuesday. when he lost to Canadian Felix Auger-Aliassime.

In doubles, Britain’s Neal Skupski and fellow Dutchman Wesley Koolhof were defeated 6-4, 7-6 (7-3) by Nikola Mektic and Mate Pavic in their second group match.

The win put the Croats into the semi-finals, but world number ones Skupski and Koolhof will still have a chance to join them when they play Ivan Dodig and Austin Krajicek in their final round-robin match on Friday.