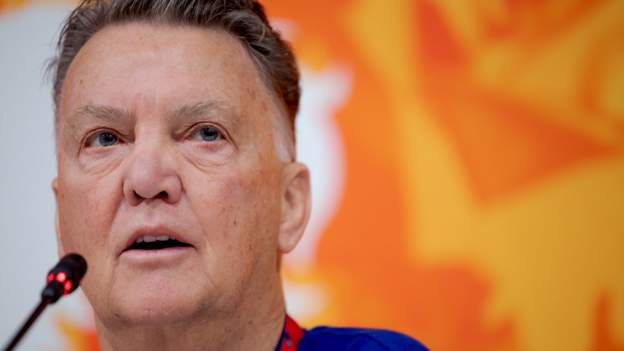 Dutch coach Louis van Gaal has once again questioned the decision to award the World Cup to Qatar, although he has praised the organization and facilities in the Gulf state.

He believes that Qatar is too small to host such a big tournament and does not have enough football heritage.

Van Gaal previously described the decision to host the World Cup in the Arab nation as “ridiculous”.

“You have to play in soccer countries,” he said.

Van Gaal, 71, added: “The aim of FIFA was, at that time, to develop countries and therefore we played here.

“But football countries have more experience in everything and you can also stimulate other countries in another way, in the right way.”

The Dutchman revealed that some of his friends and family have been having trouble booking accommodation for the tournament, which begins on Sunday.

Qatar has a population of less than three million people and the eight World Cup stadiums are only spread over an area the size of West Yorkshire.

“This is also a small country. My family and friends have a lot of difficulty finding a place,” former Manchester United manager van Gaal said.

“But the organization and the fields and everything, the facilities, are very good.”

The Netherlands is preparing for its first World Cup in eight years after failing to qualify for the 2018 tournament in Russia.

Van Gaal, who is in his third term as manager, led the team to third place at the 2014 World Cup in Brazil and believes they are good enough this time to lift the trophy, even if other teams have more talented players.

“I think we don’t have the best players in the world in our team, but I believe in team building and tactics,” he added.

“I think we can go far, but we also need luck, that is also important. For this reason and because I believe that in our imagination we can be world champions at the end of the tournament”.

Get the latest results and goal notifications for any team in the FIFA World Cup by downloading the BBC Sport app: Apple – Android – Amazon

Get your daily dose of FIFA World Cup reactions, debates and analysis with World Cup Diary on BBC Sounds