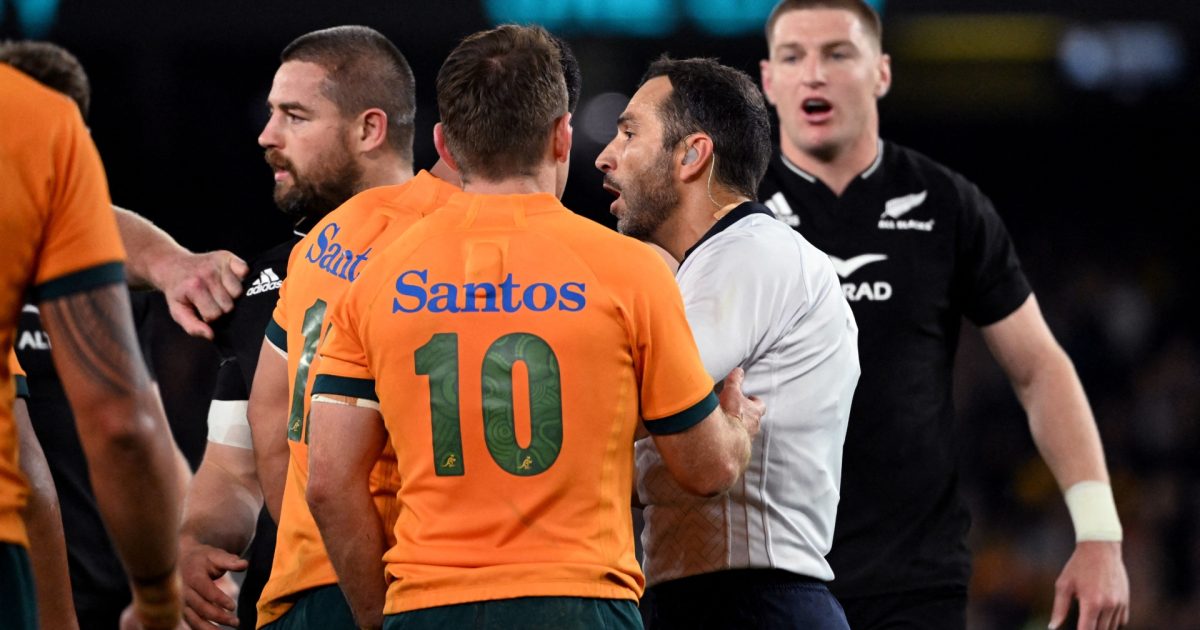 England reacted on Tuesday to the fact that Mathieu Raynal, and not Nic Berry, will be the referee in charge of this Saturday’s glamorous match at Twickenham against the All Blacks. The Australian referee, who was at the center of last year’s 62-minute video criticism that culminated in Rassie Erasmus’ lengthy ban, had been chosen last month by World Rugby’s refereeing department to be at the whistle when Eddie Jones’s team hosts Ian New Zealand from Foster.

However, that appointment was canceled on Tuesday when it was confirmed that Berry was now unavailable for personal reasons and that Raynal, who had been appointed to take charge of Saturday’s Romania-Samoa game in Bucharest, would be refereeing in London.

It is Raynal’s second successive sudden call-up as he was also appointed as emergency referee for last Saturday’s Ireland vs. Fiji match in Dublin after Jaco Peyper reported an injury.

The low-key match on 19 November in Bucharest was the only match for which Raynal was appointed referee when World Rugby published its original list of appointments for 40 matches in the Autumn Nations Series test schedule, suggesting that he has dropped down the pecking order following his controversial time-wasting penalty against Australia in September.

Raynal had penalized Australian Bernard Foley as he had a penalty he was about to kick at almost time up against the All Blacks at Marvel Stadium. The much-debated decision gave the All Blacks possession and they soon scored to snatch victory from the jaws of defeat, igniting arguments across the rugby world as to whether Raynal was right to be so strict about what he had done.

Now that Raynal has replaced Berry for Saturday’s match at Twickenham, what had England done with the change of referee? “Looking at the situation between Australia and New Zealand, which is a lesson for the players,” said Anthony Seibold, defense coach to Eddie Jones, who will leave at the end of this month to take over as head coach at Manly. Sea Eagles in the NRL. “We have not discussed it with the playing group, but it is a lesson for the players around the world, the referees want continuity.

“Rugby union is a game where it is a competition versus a continuity game. Obviously, in every ruck, there is a contest, when the ball is in the air there is a contest, but between the fans and the referees, they want continuity, so I understand the lesson I learned from that. [the Raynal decision in Melbourne]

“We have already talked about that before as a coaching staff. When that happened, it was before one of our coaches’ meetings, so we talked about, ‘Okay, how can we prepare the players?’ if you are [the media] If it had been reduced to training, you would have seen that we train very high intensity, without the trainer talking much between the different exercises.

“So I feel that we prepare the players despite everything, that we want continuity but also be very prudent with the competition part of the game. It’s [the Raynal appointment] It won’t make any difference to the way we play, but it’s a good lesson for all players that if you pause the game deliberately, there are obviously consequences at different times.”

Raynal last took charge of an England match eight months ago and his decision to red-card Charlie Ewels after 82 seconds was a big talking point after Ireland claimed victory in the Guinness Six Nations.