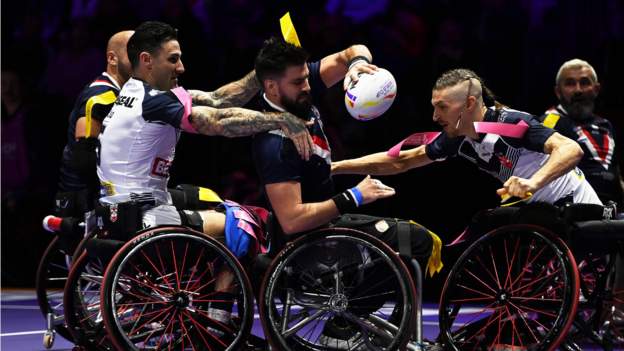 It was his second try of the game and he sealed a famous victory.

Although Nathan Collins missed the conversion, it was enough to make up for losses in the last two finals.

England head coach Tom Coyd told BBC Sport: “I was crying like a baby. I don’t know what to say. We knew we were going to win that game by two or four points. We said it all the time.”

“I’m so proud of the lads and this crowd and everyone for supporting wheelchair rugby league and England rugby league. We deserve it.”

In a spirited game, the French arguably had the best of refereeing decisions in the second half and kicks from Nico Clausells, who broke the hearts of the English five years ago with his late attempt to win the match, helped keep them in the game.

But when Halliwell broke through the French defence, it sparked wild celebrations and gave England their second World Cup title after success in the inaugural final in 2008.

Halliwell told BBC Sport: “We have all been working for this for five years. Everyone has been trying to get better and better. Tonight’s performance shows us where we are. We are the best in the world.”

“It was written in the stars, a home World Cup in front of these fans. At half time, we said we would win this game by four points.”

However, France head coach Sylvain Crismanovich was not happy with the performance of the match officials.

He said: “Do you want an honest answer or a professional answer? It was an exceptional England team, congratulations to England. But there was a lot of confusion around the officiating.”

Crismanovich also reiterated concerns he had expressed in preparation about the impact of non-disabled players on the game.

“There is an impact on the bodies of the players,” he said. “Unfortunately today England opted for show and spectacle rather than prioritizing disabled players.”

With the two teams so evenly matched, the final was never going to be a free goal spectacle and there was more defensive strength displayed by both teams.

France started well and an early Lionel Alazard penalty put them ahead as they tested the English defense before Alazard went wide for the first try of the game, converted by Nico Clausells.

England tried to get back into the game and were rewarded when Halliwell went ahead in the 17th minute for a converted try by Rob Hawkins.

Jack Brown entered the game in the 26th minute with coach Coyd hoping he could make an impact in front of a world record crowd of 4,526.

It came close immediately, but it was France who extended their lead through Mostefa Abassi’s 17th try of the tournament, converted by Clausells.

Brown had a controversial attempt disallowed for a double move, but just before half-time he got his reward, breaking through with Collins adding the extras.

England started the second half better and first Lewis King and then Brown with his second, put them in control.

But the momentum began to shift in France’s favor and Gilles Clausells fended off a tackle to pass and two goals from Nico Clausells made the game level going into the fourth quarter.

Collins checked his nerves with a 68th-minute penalty before Nico Clausells responded again to secure a finish in the grandstand.

And England made sure they had the last word in lifting the trophy.