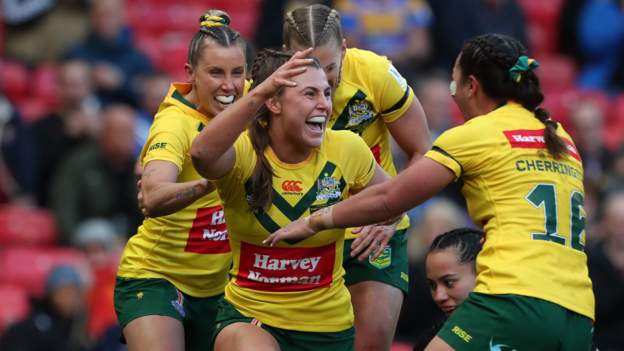 The Jillaroos, undefeated since 2016, have now won the last three tournaments to match the milestone set by the Kiwi Ferns between 2000-2008.

Jessica Sergis’s try in the 5th minute set the tone for a one-sided affair, with Julia Robinson and Isabelle Kelly then crossing twice before half-time as the defending champions established a 20-0 half-time lead.

New Zealand went into their sixth successive final with plenty of optimism, having performed well in a scant defeat in the group stage to Australia.

However, they were simply swept away on the biggest stage of all by a ruthlessly efficient Australia, inspired by Ali Brigginshaw.

The highly experienced Brigginshaw featured in four of Australia’s first five tries and replicated her 2017 player of the match performance with several excellent breaks, punching passes and a series of spiral kicks.

As the Manchester crowd rallied behind the visibly dispirited New Zealand team, with ‘oohs’ and ‘aahs’ accompanying the rare breaks across the Australian line, any hope they had of mounting a notable comeback was extinguished by the 12 minutes from the restart.

Emma Tonegato got past two defenders after taking an inside pass from Brigginshaw and drive from Sergis and then saw her roll for her second try of the match.

While the previous two finals between the world’s two leading nations had been close, with no more than 10 points separating the teams, Tarryn Aiken’s try kept the score rolling for Brad Donald’s side.

Although the loudest cheer of the day was reserved for a sweeping play by New Zealand that saw Madison Bartlett dive into the corner, two tries from Kennedy Cherrington and a late effort from Evania Pelite ensured Australia wrapped up the match in a resounding victory and the second biggest win in history. margin in a final.