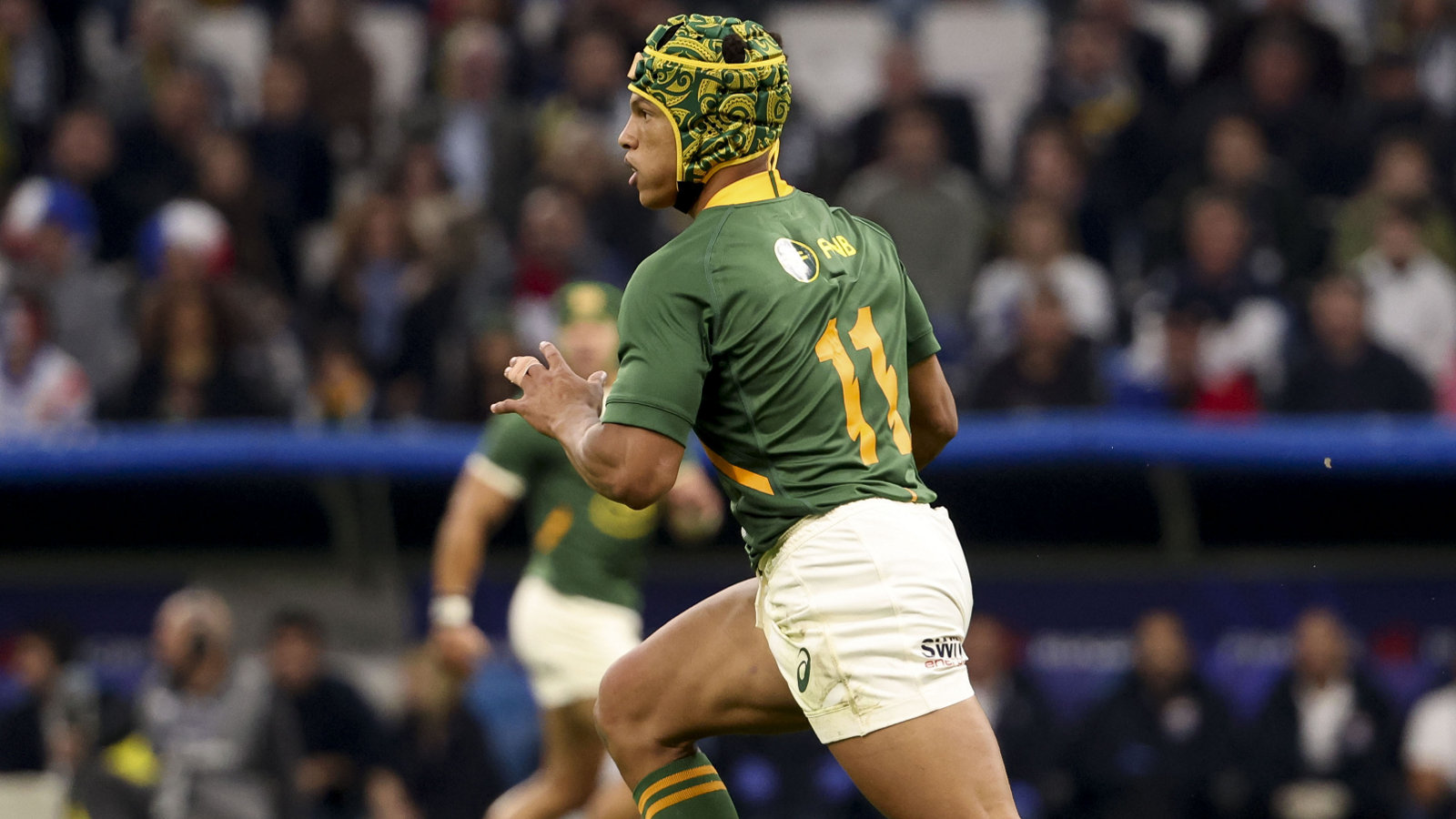 South Africa got their Autumn Nations Series campaign back on track when they sealed an impressive 63-21 victory over Italy in Genoa on Saturday.

In an entertaining and fast-paced encounter, the visitors made the most of their victory as they soaked up the initial pressure from their hosts before taking control of proceedings with an outstanding second-half display.

The Springboks outscored their hosts nine tries to two with Kurt-Lee Arendse leading the way with a brace with Bongi Mbonambi, Cheslin Kolbe, Kwagga Smith, Malcolm Marx, Steven Kitshoff, Damian Willemse and Cobus Reinach crossing for their other five points. Kolbe also had success with a pair of penalties and a conversion, while Manie Libbok netted five conversions.

For Italy, Ange Capuozzo and Lorenzo Cannone crossed the blanks with Tommaso Allan adding 11 points thanks to three penalties and two conversions.

The Springboks got off to the perfect start when Willie le Roux found Arendse with a deflected jump ball near the home 22. .

Kolbe missed with the conversion attempt before the Azzurri pulled one back with an Allan penalty five minutes later.

From the restart, Giacomo Nicotera fouled in a breakdown and Kolbe scored the resulting penalty, but Italy struck back soon after when Capuozzo shredded the visitors’ defense before crossing for a well-spent try. Allan scored the conversion from near the touchline which meant the home team led 10-8 after 12 minutes.

The next 15 minutes were hotly contested and the score kept running as Allan and Kolbe exchanged more penalties, before Mbonambi slipped from a Bok maul inside Italy’s 22 and crashed for his team’s second five, in the half hour mark.

Kolbe made no mistake from the tee spot and although the Azzurri spent some time in the visitors’ 22 during the latter stages of the half, no further points were scored during that period and the teams switched sides with the Boks winning 18-13 at the interval.

The Azzurri drew first blood through another Allan penalty early in the second half, but the visitors responded immediately when Kolbe took the restart from under Luca Morisi’s nose and pulled away before crossing the lime.

That try seemed to reinvigorate the Boks as they upped the ante in attack and soon after Arendse went off for her second try, after Le Roux and Siya Kolisi laid the foundation in build-up.

Libbok, who substituted for Kolbe through injury after his try, scored the conversion from near the touchline to score his first international points and with the score 30-16 in their favour, the Boks took more attacking liberties.

Five minutes later, South Africa were rewarded with their fifth try when Smith crashed from close range and they were also rewarded in the 63rd minute when Marx hit his five-point three-pointer from the back of a lineout inside Italy’s 22.

The home team needed an answer and it came thanks to a brilliant try from Lorenzo Cannone, which he finished off after the ball went through several pairs of hands in preparation.

Despite that score, the Boks did not take their foot off the pedal and Kitshoff soon crossed for his seventh attempt, before excellent handling from Andre Esterhuizen, Arendse and Le Roux set Willemse clear for his five-point shot.

The visitors weren’t finished and in the dying moments of the match, Arendse launched a rambling run inside the Azzurri half before lobbing an inside pass to Reinach, who cantered in for her team’s last try, which was the last nail in the coffin of his opponents.

READ MORE: Opinion: Hang up the phone Rassie Erasmus and focus on what you do best