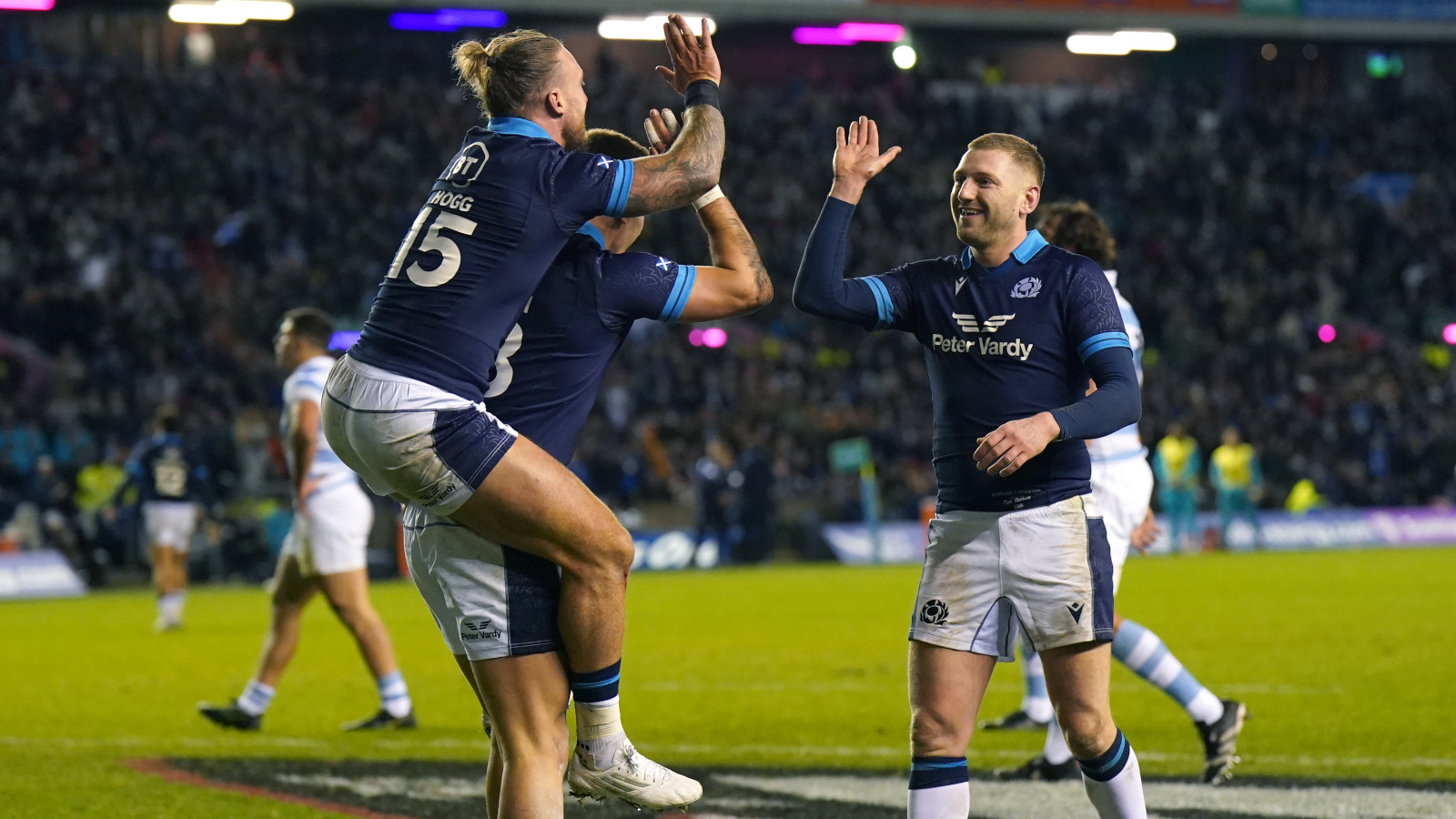 Scotland ran in eight tries and edged past 14-man Argentina 52-29, the Pumas red-carding Marcos Kremer at Murrayfield on Saturday.

For Scotland it was a match to remember for winger Darcy Graham, who scored a hat-trick, while Sione Tuipulotu (2), Duhan van der Merwe, Cam Redpath and Stuart Hogg also crossed. Finn Russell converted six of those scores when he was named man of the match.

However, the hosts got off to a poor start when they conceded a penalty on 20 seconds, after Jonny Gray entered the first ruck of the match illegally. Edinburgh wing Emiliano Boffelli duly put the first points on the board for Argentina when he sent his kick between the posts.

Scotland responded with a brilliant try on 11 minutes, when Tuipulotu took a perfectly timed volley from Russell and blasted his way past a group of Pumas to score. Russell turned.

However, home support was silenced five minutes later when Jerónimo De La Fuente spun down the left despite the close attentions of Ali Price. Boffelli went wide with his conversion attempt.

Argentina’s hopes of a result were dealt a major blow in the 23rd minute when they were reduced to 14 men after defender Kremer received a red card for a dangerous tackle on Ritchie following a TMO review.

Scotland made the extra man count almost immediately when Russell unloaded Van der Merwe just in front of the line and the forward juggled the ball between his hands before forcing it down on 25 minutes. Russell was successful with the conversion .

Just three minutes later, the Scots scored again when Graham broke through on the right after some excellent flowing play, with Russell as chief architect, but this time Russell’s shot was off target.

Argentina refused to capitulate and in the last action of the half, Matias Alemanno broke through to score after a sustained period of pressing in front of the Scots line. Boffelli converted to ensure the Scots went into just 19-15 ahead at half-time.

However, Scotland reasserted their authority just a minute into the second half, when Graham was released down the right after some fine play from Russell and Hogg. Russell hooked his kick away from the posts.

Gregor Townsend’s side, leading 24-15 at this point, had a great opportunity to tighten the screw on their opponents before the final half hour when the Pumas were temporarily reduced to 12 men after Alemanno and Tomas Lavanini were sent off. to the sin-bin within a minute of each other.

Incredibly, despite being three men short of their hosts, Argentina scored a breakaway try when Boffelli ran under the posts on 52 minutes and added the extras.

Three minutes later, Tuipulotu went wide to the right for his second try of the afternoon, with Russell kicking the conversion.

Almost as soon as Argentina welcomed their two players back, a massive brawl broke out just after the hour mark which resulted in Scotland captain Ritchie and Pumas prop Thomas Gallo receiving a yellow card. .

The Scots finally began to pull away from their scruffy visitors in the last 11 minutes as Redpath, Hogg and Graham helped themselves to try, and Russell converted all three.

Tuipulotu was eliminated at the time of death, before Argentine replacement Ignacio Ruiz scored a try, converted by Nicolás Sánchez, in the last action of an eventful match with 12 tries and six cards.