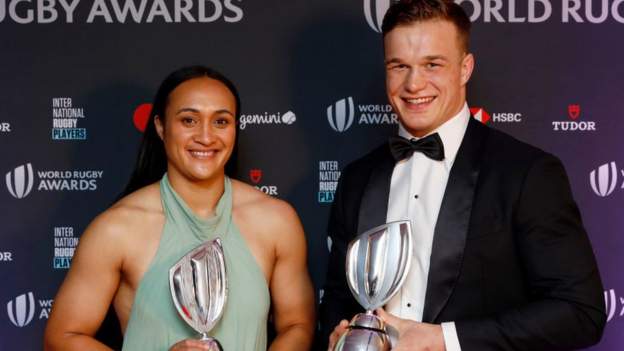 Irish wing Josh van der Flier was named Men’s Player of the Year at the World Rugby Awards on Sunday.

Van der Flier played an influential role as Ireland won an away series in New Zealand for the first time and rose to the top of the world rankings.

The Irish striker, who has Dutch grandparents, beat out teammate Jonny Sexton as well as South African Lukhanyo Am and Frenchman Antoine Dupont for the award.

“I’ve been incredibly lucky to have great teammates and coaches who have really pushed me, as well as my wife and family being very supportive,” said the 29-year-old.

“I always felt like I needed to play my best all the time or I wouldn’t be playing.”

Asked about the highlights of the year, Van der Flier said: “The win in New Zealand was right up there, in rugby terms, but my wife is sitting there looking at me and I got married in August so probably have to be.” on top.”

Black Ferns co-captain Demant delivered a man of the match performance in a 34-31 win over pre-tournament favorites England at Eden Park.

She beat out Alex Matthews from England, Sophie de Goede from Canada, Laure Sansus from France and fellow Black Fern Portia Woodman for the award.

“I come from a very small place in New Zealand and to be able to put on the black jersey is a dream,” said Demant.

“I didn’t know much about the Black Ferns growing up. Women’s rugby was never accessible or something you aspired to follow because you never had role models.”

Demant’s teammate Ruby Tui won the award for Women’s Breakthrough Player of the Year following her change of sevens, while versatile Italian defender Ange Capuozzo won the same accolade for the men.

After winning gold at the Tokyo Olympics with the Sevens team, he switched to 15s and was part of New Zealand’s World Cup-winning team.

Tui also received another World Cup winner’s medal after giving away her original medal to a young fan who had recovered from leukemia, after the final.

Maud Muir from England was among the other nominees.

Meanwhile, Capuozzo prevailed in a category that included Englishman Henry Arundell and the Irish pair Mack Hansen and Dan Sheehan.

The recognition for the rising star came just a week after he scored two tries to help his country. claim a first win against Australia.

Wayne Smith, the New Zealand women’s coach, was named coach of the year after leading his team to a 34-31 World Cup final victory over England.

The two-time Men’s World Cup-winning coach was only brought in to manage the team earlier this year and saw a dramatic turnaround in their fortunes: they had suffered a record two defeats to England in 2021.

Andy Farrell of Ireland, Simon Middleton of England and Fabien Galthie of the French men’s team, who went unbeaten in 2022, were the other nominees.

“I feel quite uncomfortable accepting this award given the quality of the other coaches that were nominated, but also really honored,” Smith said.

England’s Abby Dow’s sensational scoring against Canada in the Rugby World Cup semi-final earned her the International Rugby Players Women’s Try of the Year award, with Chilean Rodrigo Fernández winning the Men’s Try of the Year Award for a solo effort against the US this summer.