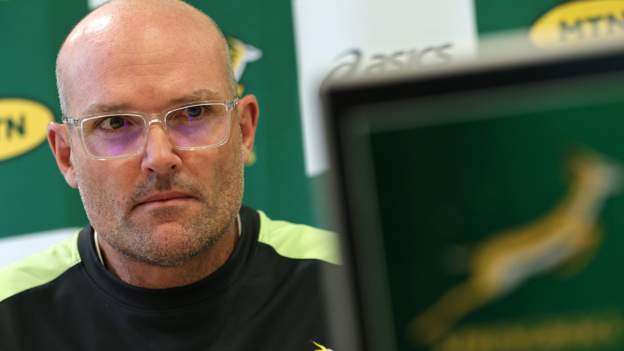 South Africa manager Jacques Nienaber has accused the rugby world of disrespecting his team in the wake of director of rugby Rassie Erasmus’ ban on posting on social media about referees.

“If all the facts are there, I think people would form a different opinion,” Nienaber said of World Rugby’s two-week suspension of Erasmus.

“It’s pretty sad if you think about it.”

Nienaber, who took over as head coach in 2019, said he believed the misconceptions about his world champion team extended to his style of play.

“We cannot control the narrative that is being published that we are boring and do not attack, that we just kick and take down,” he said.

“All the energy that you put in, you’re not going to change that narrative, that’s the narrative that people want to push.

“Whether we’ll ever get respect, I don’t know, but as long as we’re comfortable with what we’re putting out here and trying to achieve, and we’re open and honest with each other as a group.”

South Africa’s director of rugby, Erasmus, was only able to return to the Springboks’ matchday setup in October. after a year’s ban for his criticism of the referees during his team’s series win over the British and Irish Lions in 2021.

World Rugby has said his social media commentary on refereeing decisions could have a corrosive effect on the grassroots game, with the governing body’s chief executive Alan Gilpin. emphasizing that the dialogue between officials and coaches must remain private.

Nienaber said he could not disclose information he felt was not being made public due to confidentiality rules, but that it would “probably” come to light over time.

“Unfortunately, we can’t argue, it is what it is, but we know the facts and we share them with the players and within the group,” he added.

The Springboks have made six changes to the side who beat Italy 61-23 last weekend, with a host of players including winger Cheslin Kolbe and number eight Jasper Wiese forced to return to their clubs as the match takes place outside the test window.