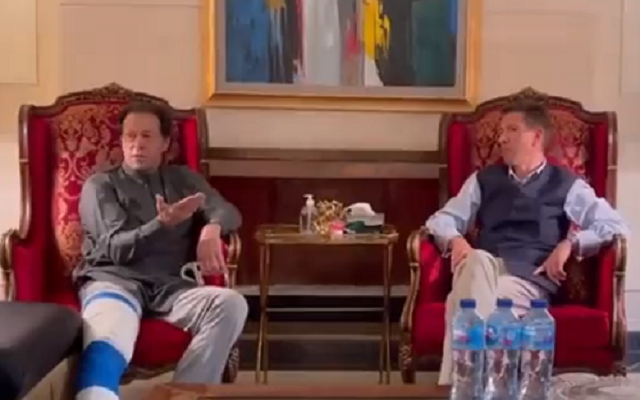 Imran met Turner and Raja at their Zaman Park residence. They inquired about the health of the former prime minister and condemned the shooting of him during the long march in Wazirabad on November 3. They also discussed matters of mutual interest.

Imran has called for a convergence of his supporters in Rawalpinidi on Saturday. The next day, the England cricket team will arrive in the federal capital for the Test series against Pakistan after a 17-year hiatus. The first Test will begin at the Rawalpindi Cricket Stadium on December 1.

Imran assured that the long march of the PTI would not affect the Rawalpindi Test. “Continue with the preparations, there will be no obstacles to the Pindi Test due to our move,” Imran told the British high commissioner and the PCB chairman.

Separately, the PTI President addressed a seminar on the performance of the economy and the challenges, organized by the PTI economic cell in Karachi via video link. In his speech, Imran supported a presidential form of government in the country. “There is stability in the presidential system,” Imran said.

Speaking about the economic challenges facing the country, Imran said that when the PTI came to power in 2018, the situation was very bad and the first year of government was very difficult. Had Saudi Arabia and the United Arab Emirates not cooperated, the country’s survival would have been at stake.

Then, the PTI president added, the coronavirus arrived and European countries went into lockdown. “But we didn’t [lockdown] in Pakistan. What would have happened to the daily wage earners if there was a lockdown?” he asked. “We increase employment opportunities by giving incentives to the construction industry.”

He stressed that the presidential system provided stability, adding that good governance cannot be established in the country until the rule of law is improved. “There are mafias everywhere and the biggest is the real estate mafia, can’t you imagine what their power is?”

“In Islamabad alone, 1.2 trillion rupee worth of government land is occupied,” Imran said. “We wanted to raise taxes using technology, but these people sitting inside didn’t want that. Imran stressed that the PTI did not need to run an electoral campaign because it would come to power anyway.

To improve the economic situation, Imran suggested several measures. “All [relevant] people have to focus on bringing dollars into the country,” he said, adding that around 10 million Pakistanis living abroad should have investment opportunities.

He also suggested measures to grant amnesty only to those who invested in the industry to launder their black money. The former prime minister told the seminar participants that there was a lot of potential in various sectors of the economy, including tourism.

Imran repeated his call to buy Russian oil, which was available at much cheaper prices. “We should have bought oil from Russia. We could have convinced the United States to buy cheap oil. In his speech, Imran also insisted that governments should come for five years.