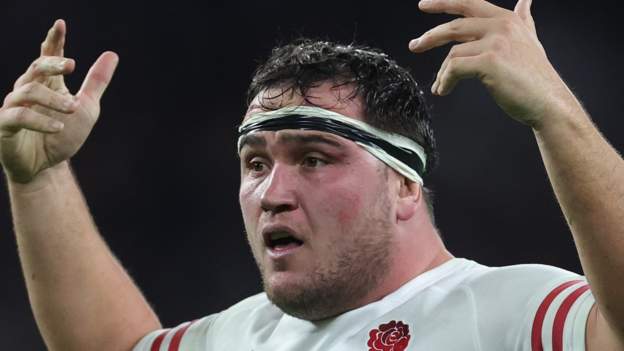 England want Twickenham to “bounce again” by recreating the style and spirit of their free-scoring barrage against New Zealand, says hooker Jamie George.

“The atmosphere at the end of that game was incredible, one of the best I’ve ever played rugby in,” he said. George in Rugby Union Weekly.

“We on the pitch need to give people things to scream about.

“We want to be able to do that for 80 minutes against South Africa and make Twickenham bounce again.”

George, who will make his first start of the autumn when England take on the Springboks on Saturday, says a win against the world champions would be the perfect way to end a patchy campaign that also saw a loss to Argentina and a win over Japan. .

“We must win because we are frustrated with how we did last weekend,” he said.

“There are some positives with the way we played and the way we came back and the character we showed, but…for both sides it’s a really important game.”

Manager Eddie Jones has challenged England to “light up” Twickenham with their play and winger Jonny May says the team is gradually developing the ability to switch styles in a bid to find a way to win.

“I think we have more clarity about who we’re trying to be and who we are, since last year,” he told BBC Radio 5 Live.

“We’re trying to be an adaptable team, a smart team, a team that still has all the traditional aspects of English rugby, but can play in slightly different ways.

“There are so many variables. You have to be a team that understands the story and the theme of a game and can adapt to the weather, the referees, the injuries, the television match officials and then take your chances in the game.”

“That’s what we’re trying to achieve and it’s difficult. We talk about the top eight, top 10 teams in the world being very close together and I think the team that can come out of that group will be a complete package.” “

South Africa arrives at Twickenham on the back of a resounding nine-try victory over Italy, but fell short against Ireland and France, the world’s top-ranked teams, in early autumn.

Center Lukhanyo Am is one of several high-profile Springbok absent as the World Player of the Year nominee recovers from knee surgery.

He believes his own side has fallen on the wrong side by some small margins so far this month.

“I think he will take advantage of the big moments,” he told Rugby Union Weekly when asked what the deciding factor could be against England.

“When you’re up against quality teams you have to be at the top of your game and sometimes we’re missing big moments. It’s crucial. Those chances come and go, it’s a game on the margins, converting or scoring a crucial try can be the decider of the game, whether you win or lose.

“Those moments are very important.”