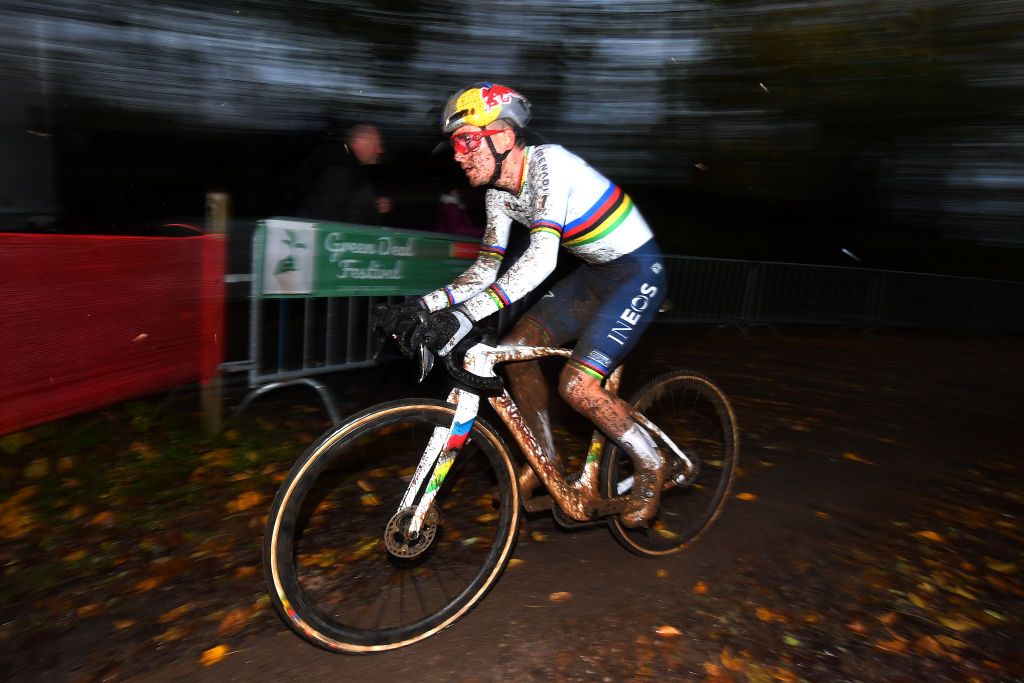 Tom Pidcock (Ineos Grenadiers) claimed his first cyclocross win in the rainbow jersey at the X20 Trofee Kortrijk on Saturday, but the world champion has little time to rest on his laurels. On Sunday he will face Mathieu van der Poel (Alpecin-Deceuninck) for the first time this winter as the Dutchman begins his cyclocross campaign at the Hulst World Cup.

It remains to be seen how Van der Poel will perform on his first outing of the winter, given that even Pidcock himself needed a race to catch up last weekend. After placing seventh in his season debut at Superprestige Merksplas, Pidcock overcame mechanical problems to place second in the Overijse World Cup the following day.

Pidcock’s form seemed to grow in crescendo in Kortrijk on Saturday, where he took the solo victory. In the lightning interview that followed, the Briton suggested that Van der Poel was likely to get underway at Hulst.

“Of course, we can expect a good Mathieu. I’m not sure where exactly he starts on the grid, but we can surely expect him to be good,” said Pidcock. “I think I wouldn’t expect anything less.”

Van der Poel was absent through injury when Pidcock won the Hulst World Cup last season. The other member of the cyclocross Big Three, Wout van Aert, will miss Hulst this season as the Jumbo-Visma rider won’t start his winter until December 4 in Antwerp.

In Saturday’s race at Kortrijk, Pidcock spent more than half the race alone in front, though his lead over pursuers Lars van der Haar (Baloise Trek Lions) and Eli Iserbyt (Pauwels Sauzen – Bingoal) never extended further. of the 17 seconds.

“I had a bit of a gap, but I couldn’t really widen the gap,” Pidcock said. “I knew if those two got together they would be thinking overall and sure enough when they got together I got a little bit more of a difference. It has been a tough race, similar to last Saturday. But much better than that [for me].

“I was feeling a bit tired this week, a bit under the weather. The weather has turned colder and it’s good that I still feel good today.”

Pidcock started his cyclocross season a bit earlier than in 2021, when he didn’t post a number until Boom in December. “You feel like a fool every time you do your first race of the year,” Pidcock quipped after his seventh-place finish. On Saturday, he acknowledged that his form was more advanced than it was at this time last year.

“I think this year I am certainly in better shape. I think he showed it last week, even if it wasn’t a win, like Michael [Vanthourenhout] it showed how good he is in those courses,” Pidcock said.

“I think every day that I get to race in this jersey, it’s nice, it’s a nice experience. All the fans support me very well in Belgium and that’s why I’m also trying to learn a little flamenco. I’m going to enjoy this winter, I think.”