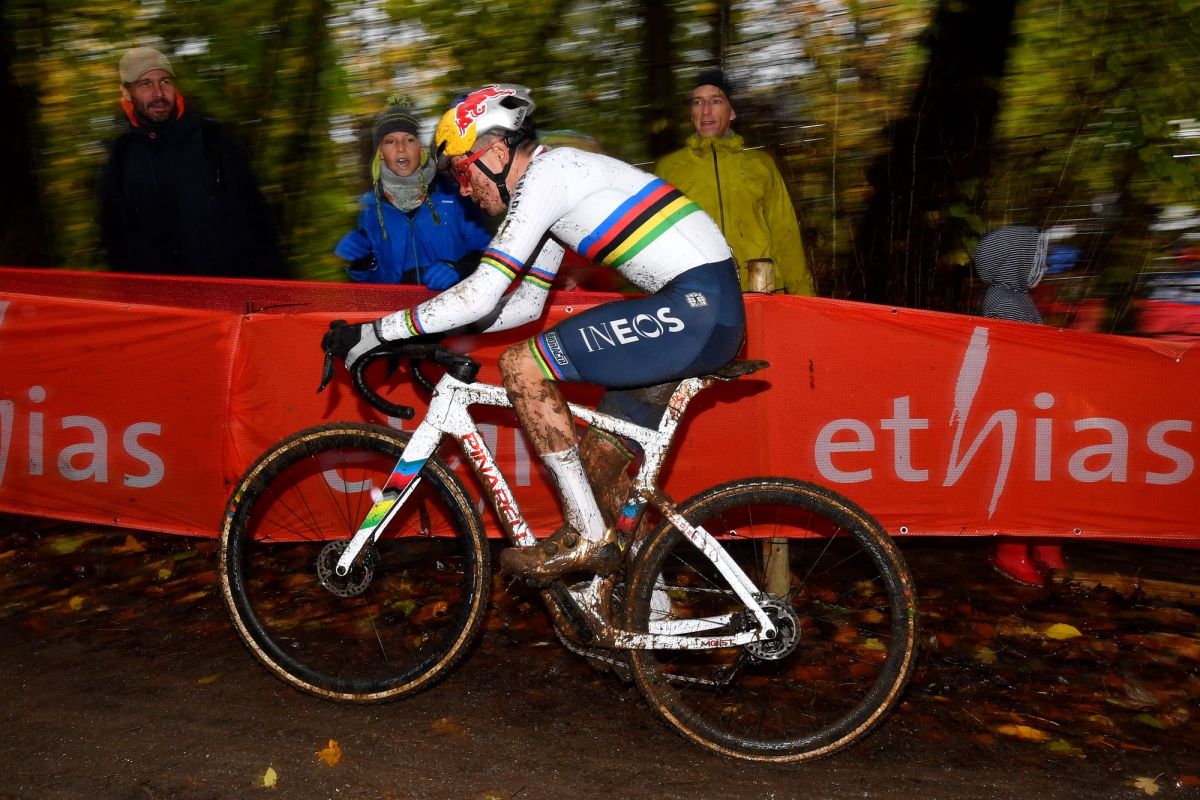 Tom Pidcock annihilated his competitors to take a sensational first win in his rainbow cyclocross jersey, and first win of the cross season, at the X20 Trofee Kortrijk – Urban Cross in Belgium this afternoon.

The reigning world champion dominated proceedings in the Belgian race to take his first rainbow stripe victory in style, after winning the title in Fayetteville, USA earlier this year.

Behind the British rider, Baloise Trek Lions’ Lars van der Haar and Pauwels Sauzen-Bingoal’s Eli Iserbyt had to battle for second after Pidcock pushed him early on lap two.

The “street circuit” at the Belgian race seemed to be right down the road from Leeds-born cyclists. Pidcock pulled away from the rest of the field on the second lap, quickly securing a lead of over 10 seconds that only wavered slightly in the closing stages of the race.

In the end, Pidcock crossed the finish line three seconds ahead of van der Haar, who passed Iserbyt for second place.

After the race, Pidcock told reporters that he had been pushed to the finish by van der Haar and Iserbyt.

He said: “It was tough, it was super fast. I got a little gap, but I couldn’t really extend the gap. There was always Lars and Eli chasing. It was a tough race trying to stay focused.” And I keep my pace.”

“I knew if the two of them got together they would be thinking about the GC and sure enough when they got together I got a bit more of a gap. It was a tough race, similar to last Saturday.” [UCI World Cup Overijse]. But much better than that”

“I think every day that I get to race in this jersey, it’s nice, it’s a nice experience. All the fans support me very well in Belgium and that’s why I’m also trying to learn a little flamenco. I’m going to enjoy this winter, I think,” he added.

Pidcock kicked off his cyclocross season last weekend with a double header on Belgian soil, the Merksplaas Superprestige race and the Overijse world cup round.

He looked to be in impressive form in Overijse and if it hadn’t been for a series of bad luck he might well have taken the win.

Stuck gears, a heavy crash and a broken shoe meant Pidcock was forced to settle for second in Overijse, but he explained there were still positives to be drawn from his performance.

“I can be happy, since yesterday I am much more used to the pace of the race and the technical parts,” he said. “I can be pleased, but it would have been nice to have my hands in the air.”

A week later, he took his first win of the cyclocross season before a duel with Mathieu van der Poel at the Hulst World Cup race in the Netherlands on Sunday.

Despite taking his first win, Pidcock explained that he would be on his guard against van der Poel tomorrow.

“Surely we can expect a good Mathieu. We shouldn’t expect less,” he said.