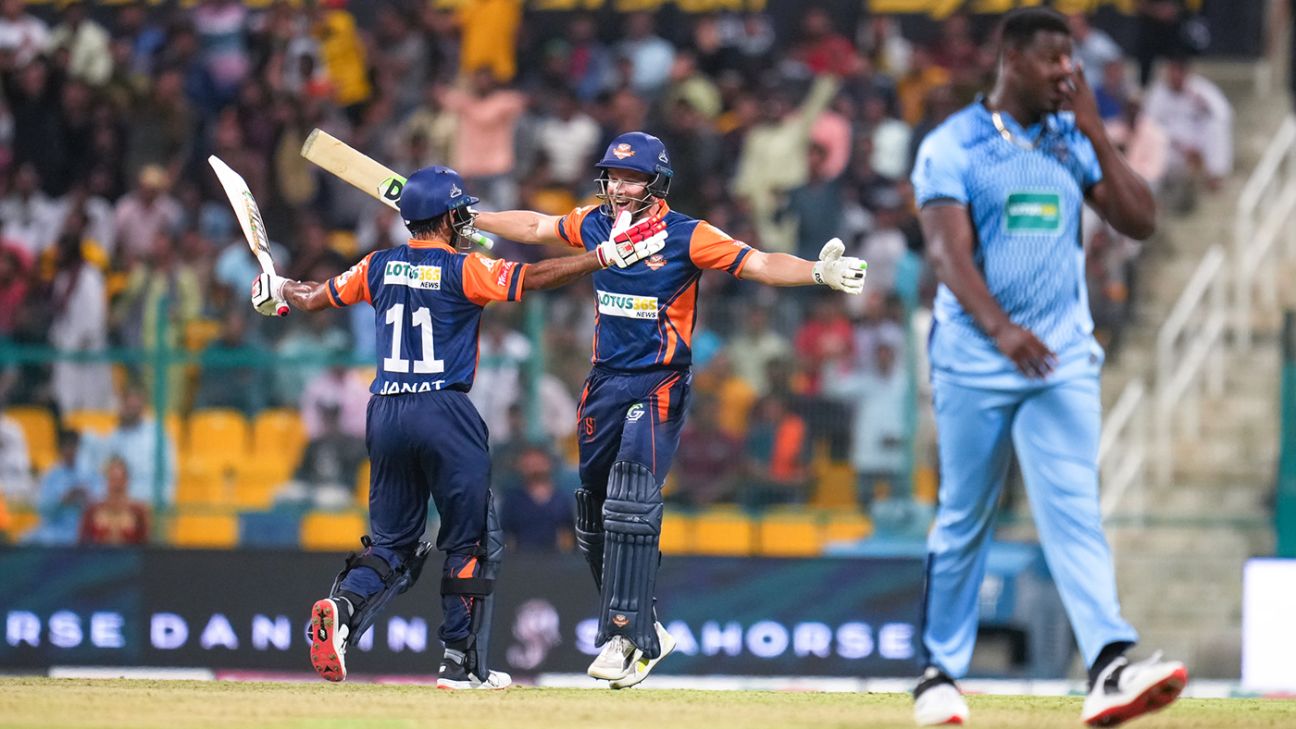 Three wins out of three and everything seems nice and easy for Morrisville Army Samp in his first performance at the Abu Dhabi T10. They have adapted to the format like ducks to water and will enter the second week of the tournament as the only undefeated team remaining in Season 6 of the competition.

Set a goal of 106 per Chennai Braves after captain Moeen Ali chose to bowl first, Samp Army timed their chase to perfection with Karim Janat taking center stage with an excellent 28 delivery unbeaten 58.
With 11 required in the final, Janat gave Carlos Brathwaite a taste of his own medicine by sending him off for two straight sixes to finish the job in style. Despite all the power of David Miller at the other end, who combined with Janat to put up 76, it was the experienced South African who allowed the man from Afghanistan to take center stage.

Miller faced just 10 of 35 deliveries during their partnership as Janat cashed with six sixes during her match-winning hit. The pair came together on 31 for 2 in the fourth over and the Braves simply had no answers for Janat’s power and timing.

His first six came late in the fifth over as he crushed Sikander Raza in a long time and dropped Sabir Rao in the next over with two more tops. In the penultimate over, Sam Cook started well, varying his pace, but Janat was up to the task as he intercepted Cook’s slower ball and flicked it over the deep square leg for six. Miller then took advantage of Cook’s full pitch to reduce the equation to 11 for seven, but missed the final ball, which meant Janat was in strike.

Perhaps it was watching Brathwaite deliver the final that inspired Janat to wrap things up in limits and there was no sign of him delegating the duty to Miller. Janat bowled Brathwaite’s first ball over the deep midwicket for six to bring out his half-century, before sending the next ball across the ground and over the ropes to seal victory.

Lance Klusener, head coach of Samp Army, echoed his praise for Janat after the match, who has now scored 80 runs from 42 balls in the tournament at a strike rate of 190.47 without being sent off.

“It’s not a surprise to me because that’s what he does. The talent has always been there and I’m delighted that he’s been able to deliver on that stage,” said Klusener, his former Afghanistan coach. “There aren’t many that he knows that will try harder and work harder than him.”

Janat himself insisted that Miller backed him to take on the bowlers during their talks between overs. “David’s experience was helpful and he told me to do it,” he said.

Go ahead, he did it. Samp Army’s run chase was the fifth consecutive goal chased in the tournament after the first eight games of the season were won by the side batting first and, judging by initial impressions, it looks like the side to beat.

With a shrewd bowling attack that includes the likes of Anrich Nortje, Sheldon Cottrell, Dwayne Pretorius and George Garton, combined with Moeen’s leadership, they stormed out of the blocks and made the dream start to their first campaign at Abu Dhabi. T10.

In the first game of Sunday’s triple header, skipper Rovman Powell smashed 76* from 28 balls to take his northern warriors side to his first victory of the competition by beating bengali tigers by six wickets.
The final game saw a rematch of last year’s final as Deccan Gladiators turned against delhi bulls. Tom Kohler-Cadmore’s brutal 82* in 33 deliveries took the Gladiators to a total of 140 for 2 of their ten overs and, despite the best efforts of Rilee Rossouw (28 for 15) and Tim David (48 for 24) in a partnership of 79, the Bulls ultimately fell short by 18 runs.