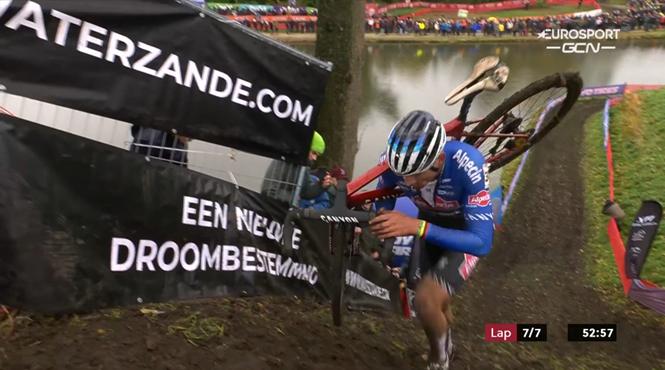 What’s going on with the Ineos Grenadiers cyclocross bikes this month?

Firstly, the British team’s star signing Pauline Ferrand-Prévot and her new Pinarello Crossista F made a turbulent debut at the Koppenbergcross earlier in the month.

The 13-time multi-discipline world champion in Ineos colors was derailed by a stuck chain and a failed bike derailleur’s first lap, while further derailleur issues forced the French cyclist to lug her faulty bike and run up the steep Final climb of the Koppenberg. .

> “The road season is much more important to me”: Pidcock casts doubt on world cyclocross defense after dramatic debut weekend in rainbow jersey

Stuck gears were also the order of the day nearly three weeks later, as Tom Pidcock’s return to World Cup racing on the rainbow risers at Overijse last weekend was all but thwarted as soon as it began. for his bike’s refusal to cooperate.

However, an impressive and dramatic effort saw the world champion recover and then shoot out of the front of the pack, before disaster struck again. On the penultimate lap, Pidcock crashed, breaking his shoe in the process and allowing eventual winner Michael Vanthourenhout to run away for a narrow victory.

Pidcock was heading for 2nd place but a broken wheel forces him out of the race! 😱 #CXWorldCup pic.twitter.com/Sz9PPC4sVj

Well, the Ineos Grenadiers are hoping that bad luck will only come in threes as the 23-year-old from Yorkshire suffered another bout of bike-related bad luck yesterday in Hulst.

Pidcock, who claimed victory at the X20 Trofee Kortrijk on Saturday, securing his first win on the rainbow stripes, continued his flying form in an epic head-to-head duel with four-time world champion Mathieu van der Poel during round seven. of the Cyclocross World Cup this winter.

After a mammoth fight at the brutal and muddy Hulst circuit, an unfortunate slip mid-race off one of the circuit’s many steep ramps allowed the Dutchman to finally pull away from his British rival for a winning return to cross field.

However, Pidcock looked set for a strong second place until the curse of Ineos struck once more on the final lap. A crash on a tricky descent into a fence post caused the Ineos rider’s Shimano rear wheel to buckle and bend like a non-EU regulated banana.

Man, what is it about the Ineos CX bike that means it doesn’t work in cyclocross racing? 😅 https://t.co/5OkEbviJno

The last untimely mechanical mishap of the season forced the world champion to initially proceed on foot, his bike slung over his shoulder and the broken wheel waving sadly in the cold Dutch air, before finally, and unceremoniously, jumping out of the race over the barriers and into the crowd.

“I don’t know exactly what happened either,” Pidcock told Het Nieuwsblad after the race. “I think I hit something, maybe that post or maybe something else.

“I’m not too sure. My wheel broke after that. I walked for a while, but it was still a long way off, and it was of little use.” 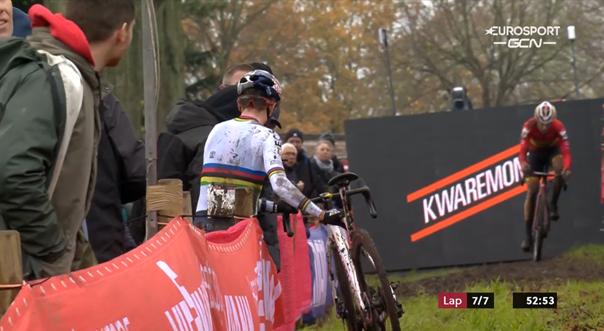 Of course, this isn’t the first time this season that Shimano’s wheels have buckled under pressure. At Paris-Roubaix, two of Jumbo-Visma’s Shimano Dura-Ace R9100 carbon rear wheels buckled under their riders on the harsh cobbled roads of northern France.

> What is happening with Shimano wheels? Two Dura-Ace carbon wheels bend in half at Paris Roubaix

Shimano is determined to promote this whole non-circular wheels thing, but I’m not sure it’s going to catch on. pic.twitter.com/W8YKPMmoXB

Never mind the curse of the rainbow jersey, Pidcock surely hopes that the ‘curse of the Ineos mechanic’ can be exorcised before his next meeting with Van Aert and Van der Poel…