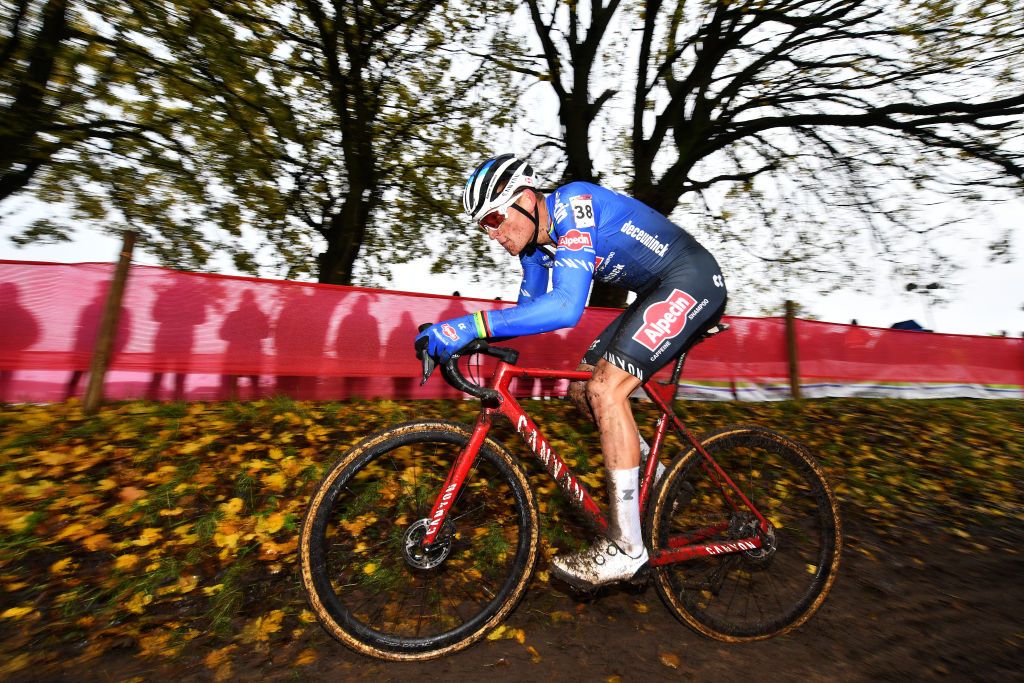 Mathieu van der Poel (Alpecin-Deceuninck) put on a dominant display in Hulst to win the World Cup on Sunday, winning his first cyclocross race in almost two years in his first event of the season.

World champion Tom Pidcock (INEOS Grenadiers) looked poised to take second place for much of the race, but a heavy crash on the final lap took the Briton out of the race with a broken rear wheel.

After a steady start to the seven-lap race where some technical errors delayed Van der Poel’s comeback, he soon found his rhythm and took the lead on lap four, never to be caught again.

“It feels pretty good,” Van der Poel said at the end. “It’s been a long time since I’ve won a cyclocross race, last year was not a good season. I can’t even call it a season because I did a cyclocross race and a half because of the back problem. Like I said I felt pretty good, I had good preparation for Hulst and I’m very happy with the form, technically I made a lot of mistakes, but I think that’s normal.”

“I’m happy to be back, but there’s still work to do to be at my highest level. But I can only really be happy today.”

It was Dutch champion Lars van der Haar (Baloise Trek Lions) who fired up the start of the race, attacking from the line to take an early lead in the mud of Hulst. However, despite Van der Haar’s motivation, all eyes were on Tom Pidcock’s rainbow jersey and the looming presence of Mathieu van der Poel, starting his first cyclocross race of the season.

Winner of the X2O Trofee at Kortrijk on Saturday, Pidcock was perhaps the favorite rider over the unknown form of Van der Poel, but both started strongly behind Van der Haar, holding on to their top 10 places and moving quickly into the top 5.

Going through the pits for the first time, Van der Poel sped up to pass Van der Haar and Eli Iserbyt (Pauwels Sauzen-Bingoal) and take the race lead within the first ten minutes of the race. However, his acceleration saw him make a small mistake and go out in an off-bank section, though he barely conceded anything and quickly moved back to third.

At the front of the race, meanwhile, it was World Champion Tom Pidcock who pushed ahead, taking Sweek with him as the pair led their competitors by seconds. After regaining some composure, Van der Poel found his way back to third position and closed on the leaders, prompting Pidcock to once again accelerate to the front of the race.

Van der Poel’s efforts had dragged him, Iserbyt and Van der Haar back behind the wheel of Sweeck, whom he soon passed before catching up with Pidcock to take the race lead at the halfway point of the race.

After a slow start to the race, Van der Poel was in full flight by lap five, gaining ten seconds on the chasing Pidcock and was setting his fastest lap times but still not making up ground on the leader.

At the bell the result looked certain with Van der Poel clearly ahead and Pidcock in second, but it was a disaster for the world champion who crashed heavily on the last lap, twisting his rear wheel and unable to remount. his bike. Breaking down time and positions, the rainbow jersey left the course early and did not finish the race after riding hard all day.

With no one to chase, Van der Poel took an undisputed victory ahead of Laurens Sweeck and Eli Iserbyt. Sweeck’s second earned him enough points to pass Iserbyt overall and he will wear the leader’s jersey at the next round in Antwerp next week.

Van der Poel will also continue his cyclocross campaign in Antwerp as he prepares for the World Championships in February.