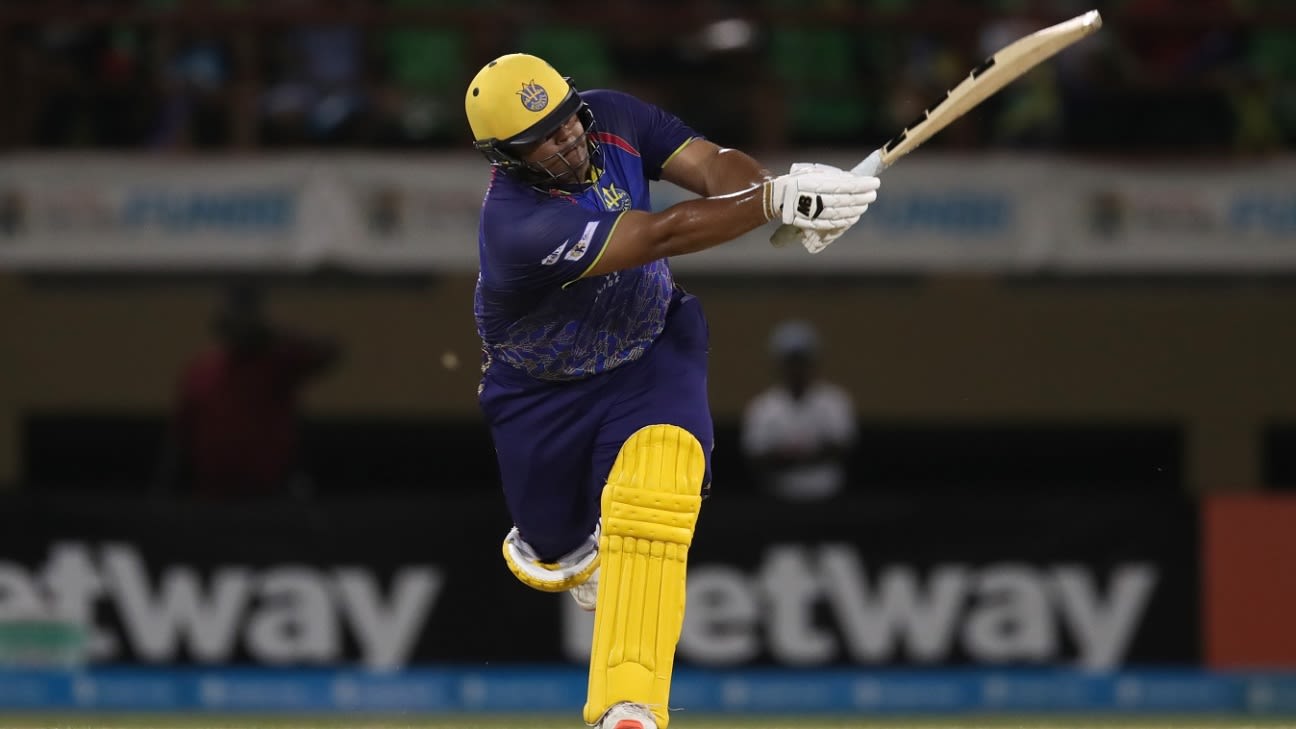 Azam Khan has always had big boots to fill; of course he would, as the son of former Pakistani cricketer Moin Khan.

Perhaps an international debut came a little too soon. Or did he really not have the right opportunity? Azam played three T20Is for Pakistan in July 2021, batting twice and scoring just six runs in the seven deliveries he faced. But he hasn’t played at the highest level since.

Surely his time will come again; It is a matter of when rather than if. But right now, Azam is hitting the ball as well as ever.

Fresh off an impressive CPL campaign in which his 257 runs were second only to Faf du Plessis in terms of foreign players, Azam was back in touch in Abu Dhabi. The 47* of 21 deliveries from him was a joy to watch on Monday night as he new york strikers became the first team to defeat Moeen Ali Morrisville Army Samp in Abu Dhabi T10, winning by 12 races.
Azam’s jab was sweet throughout, but the dismissive way he treated two experienced bowlers in Sheldon Cottrell and Anrich Nortje in particular drew attention.

The 24-year-old attacked Cottrell for 16 in the seventh over, first hitting a long for six before daringly sweeping it over deep square leg back for a further six, and finishing the over with a borderline strike.

Facing Nortje, Azam made it 6, 4, 6 before the South African caught him with a yorker to leave Azam just three shy of his half-century. He now has 118 runs off 67 balls in four games in Season 6 of the Abu Dhabi T10 at an average of just 40, and looks to be going from strength to strength. After the match, Azam spoke of the way he has worked on his batting against the bowlers.

“I’ve been practicing at really high speeds on the bowling machine when I’m not playing, so I’m not scared of pace anymore,” he said. “There was a prospect in Pakistan that I can’t cope with the pace, but now I’m playing all over the world. [while] scoring runs. It’s hard, but you have to be on your feet all the time and work hard in the gym, which I’m doing.”

In the clash of the new franchises, Strikers struck first with a total of 110 despite losing wickets throughout. Kieron Pollard had to use eight pitchers, but they did the job to get the Strikers even on points with Samp Army.

First Pollard took out the dangerous Johnson Charles, before Paul Stirling collected David Miller’s prize wicket. But Moeen and Shimron Hetmyer kept Samp Army in the game, and after they defeated Ravi Rampaul for 16 in the eighth, the equation narrowed to a required 31 12-ball.

Hetmyer defeated Jordan Thompson to six, but on the next ball the West Indies found his compatriot Pollard. Moeen was on strike for Rampaul’s final over, with 16 needed from the last four balls.

Rampaul set up a heavy offside field, and the bluff worked as Moeen crossed and was brought down trying to get away to the leg side; and two balls later, Dwaine Pretorius suffered the same fate.

It was a mightily impressive victory for the Strikers, especially after falling from 66 for 2 to 110 for 8, but if anything, it showed the value of having a genuine six hits. Azam’s five sixes were one more than all of Samp Army’s combined, and after an impressive CPL all he can do is keep knocking on the door for his country.

“It hasn’t been easy for me, people think I’m a product of nepotism,” he said. “I’m performing all over the world now, so it’s up to them if they want to cast me.”

After a World Cup in which Pakistan’s batting order could perhaps be criticized for taking a somewhat timid approach, Azam represents something daring and a little more flashy: a desire to take the risk and own the game. Ultimately, these experiences in franchise leagues around the world can only benefit Azam in his broader quest to follow in his father’s footsteps and play for his national team.

“The allure of representing Pakistan is such that no T20 league can match it,” Azam said in an interview with ESPNcricinfo earlier this year. All he can do is keep doing his thing if he wants to feel that feeling again.