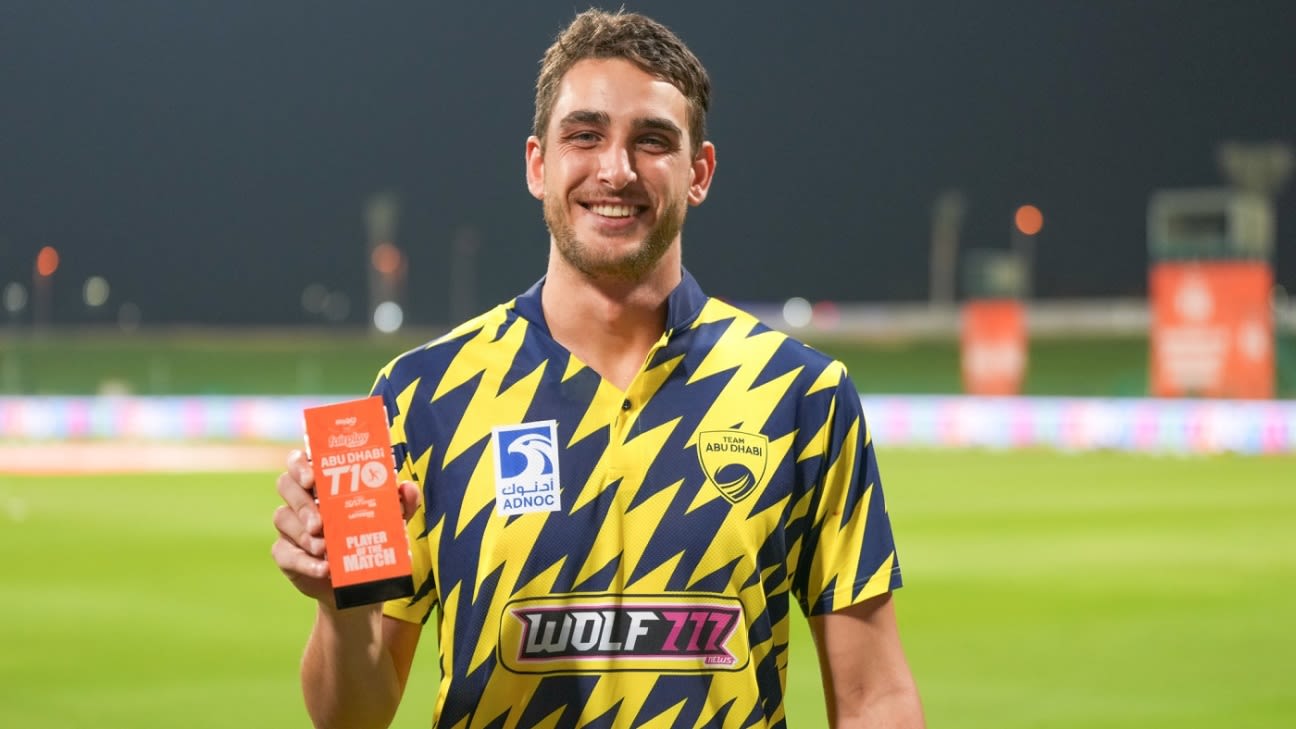 Peter Hatzoglou had no intention of spending his 24th birthday in Abu Dhabi. But now he’s living the life of a T20 freelancer and with the way he’s doing, he’ll have many more franchise gigs to keep him busy and perhaps many more birthdays abroad.
Hatzoglou ended his birthday celebrations on Sunday by watching The Lion King Musical in Abu Dhabi and apparently enjoyed his Monday off. On Tuesday afternoon she decided that the celebrations were going on. Hatzoglou turned up and bowled two overs against Moeen Ali Morrisville Army Sampruling out Johnson Charles, Moeen and David Miller while inspiring Team Abu Dhabi to his second consecutive victory.

On the side with the likes of Alex Hales, Chris Lynn, James Vince and Adil Rashid, Hatzoglou is becoming the main attraction. On his first changeup, he tossed the ball to Charles and found the top edge of him before Moeen hit a straight one to Fabian Allen in coverage, who held magnificently with one hand. And when Hatzoglou dropped the destructive Miller in his second over, Morrisville Samp Army was left reeling at 21 for 5 and their 101 chase was all but over.

That they finally reached 82 for 9 was thanks to Basil Hameed, who crushed 47 not outs from 18 balls to ensure the score looked remotely respectable. No other Samp Army batsman reached double figures.

But this was Hatzoglou’s day off, and in many ways, it’s becoming his tournament. In a format where teams tend to score at least ten for more, his 3-for-6 numbers were quite a lot. His economy rate in four games is only seven and he is taking a wicket for every seven balls.

On November 17, Hatzoglou took his CFA (Chartered Financial Analyst) exams and flew to the United Arab Emirates for the Abu Dhabi T10 that same day. He’s still waiting on the results of those tests, but it’s safe to say that he’s passing almost every test that’s come his way with the ball in hand.

In addition to Tuesday’s three wickets, his tournament scalps include the likes of Suresh Raina and Tim David. Right now, he has seven wickets for just 56 runs in the eight overs he’s bowled in the tournament.

“All the hitters are really trying to bring you down,” Hatzoglou said after the game. “To be honest, my plan hasn’t really changed. I’ve never played T10 before, but I’m just trying to get to the top of the stumps with a few more variations than I would probably use on a T20.”

He wasn’t even meant to be here if it wasn’t for a last minute selection of Paul Farbrace and company in the Abu Dhabi team. And in true Hatzoglou fashion, he didn’t even know it until he got a message from Tymal Mills, whom he knows from their time together at Perth Scorchers.

“I was actually in Spain on a golf trip after The Hundred with some friends when the draft happened,” Hatzoglou said, “so I turned on the YouTube stream and they didn’t pick me up. So we turned off the draft stream and continued with our night but what I didn’t realize was that there was an extra pick for each team I was picked at the time and I didn’t know it but I got a text from Tymal Mills and that’s when I realized that actually had been picked up.”

There is evidently something about the man who described himself as an “accidental cricketer” who is proving a struggle for batsmen in the tournament. Whether it’s the flashy action of him looking a lot like Ravi Bishnoi the Indian bowler, or the pace and energy with which he bowls, Hatzoglou believes the overall element of surprise is one of the great strengths of him.

“When I was at Oval Invincibles at The Hundred, we watched my bowling with analyst Freddie Wilde,” he said. “That pace is kind of unique and the drift and bounce that I get. I get pretty much but no spin, but overall, that wow factor has been huge for me.”

Over time, that element of surprise will no doubt lessen, but for now it’s working like a charm, and as the saying goes, “if it ain’t broke, why fix it?”

Hatzoglou will head to the Big Bash League after the Abu Dhabi T10 but, unlike last year, he will not return to the KPMG office in the new year. The plan is to fully embrace the globetrotting T20 lifestyle. Who knows what comes next, but just the thought is exciting enough.