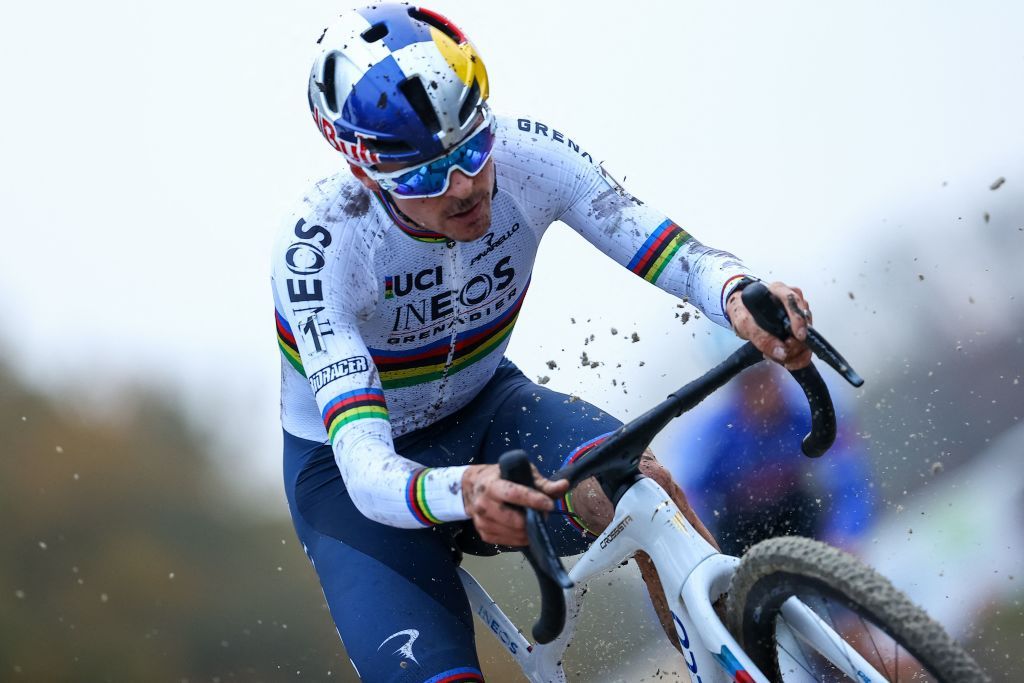 Tom Pidcock has argued that he faces an uphill battle in his battle against arch rivals Mathieu van der Poel (Alpecin-Deceuninck) and Wout van Aert (Jumbo-Visma) in cyclocross this winter, claiming he is at a natural disadvantage in terms of their respective physical

The Ineos Grenadiers rider has clearly had no problems with his winter cyclocross form, taking an impressive victory – his first of the season – in his third race of the year at Kortrijk this past weekend.

He then launched a huge challenge to Van der Poel at the Hulst World Cup 24 hours later, only to be thwarted by a broken wheel.

However, the defending world champion argued over the weekend that other factors were not making it easier for him to challenge the Belgian and Dutch stars in off-road battles.

“I don’t have the weight and power of Mathieu and Wout,” Pidcock said according to the In De Leiderstrui website. “It’s hard to beat them in races like this.

“However, I will keep trying and the rainbow jersey will help a bit,” he added.

In a recent edition of The game podcast, Pidcock’s trainer Kurt Bogaerts confirmed his protégé’s pessimistic analysis of his potential to take on Van der Poel and Van Aert off-road.

“If it wasn’t for them, Tom would have won a lot more. Now he often gets on the podium with them, but it’s hard for Tom to beat them,” Bogaerts commented.

“They have more outright power, which is useful in the mud and on the sand. Tom is a lightweight, currently not far from his Tour weight at 58kg.”

Pidcock has already raised a question mark over whether he will defend his World Champion jersey next February, noting that he will also look to put in a good performance on the road in the Classics later in the season. In those spring races he will also face Van der Poel and Van Aert.

Beyond his misgivings about cyclocross, Pidcock also has an intense road season ahead of him, with the Classics in the spring followed by the Tour de France in July and the World Championships soon after.

It is likely to include Omloop Het Nieuwsblad as its one-day season opener, followed by the main Classics period in March and April, from Milan-Sanremo through the Flemish Classics to the Tour of Flanders, and possibly a debut in Paris-Roubaix. He would then turn to the Ardennes Classics before completing his spring.

Pidcock is all but confirmed to return to the Tour de France after his brilliant debut this year, when he won the Alpe d’Huez stage, spent time in the white jersey and finished 16th overall. He has outlined his desire to challenge for the overall title in the future and while 2023 may be too soon for that, he will have a protected leadership role at Ineos Grenadiers.